Official artwork of Ganondorf for The Legend of Zelda: Twilight Princess HD.

Gerudo (as Ganondorf)
Demon (as Ganon) 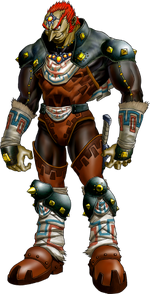 Ganon's appearance has changed over the course of the series. In his first appearance, he appears as a monster whose facial features are like that of a pig's with turquoise skin (though it will change to red at one point, which is the cue to hit him with the Silver Arrow), while in The Legend of Zelda: A Link to the Past, he has blue skin and turns silver when weak to the aforementioned Silver Arrows. In Ocarina of Time, Ganon's skin is dark green and he has yellow eyes (and so far, this and Twilight Princess are the only games to depict Ganon with a tail). The Legend of Zelda: Twilight Princess, in a departure from previous games, features a quadrupedal Ganon for the first time, and appears as more of a boar than a pig.

In his first appearance as Ganondorf in The Legend of Zelda: Ocarina of Time, it is revealed that he is the only male in the Gerudo Tribe, born every 100 years. All Gerudos are identified by their noticeably darker skin (which may be due to living in the desert) and red hair. He is seen wearing armor in both Ocarina of Time and Twilight Princess, while in The Legend of Zelda: The Wind Waker he appears to be wearing sorcerer's robes.

Ganon is the primary villain in most of the Zelda games, with his schemes usually involving kidnapping Princess Zelda, conquering the land of Hyrule, or obtaining the Triforce (sometimes all three). The only game (So far) to feature Ganondorf as a playable character is Hyrule Warriors, which is a spinoff, and thus non-cannon.

Unlike most of Nintendo's other famous villains, such as Bowser, Ganondorf is a cunning, intelligent, and an extremely powerful character. Andross from the Star Fox series shares this trait. In Ocarina of Time, Ganondorf accomplishes something that Bowser (and many other villains) struggle with--he conquered the world! Thus, Link had to build up his strength so he could take Hyrule back from Ganondorf, who had ruled for seven years by that point.

Whether he appears as Ganondorf or as Ganon (A Link to the Past's game manual gives him the name Ganondorf Dragmire which is a name which hasn't appeared before or since), Hyrule knows that it will be facing an incredible evil that only Link and Zelda can stop.

Ganondorf makes his first appearance in the Smash Bros. series as a secret playable fighter in Super Smash Bros. Melee. He can be unlocked after completing Triforce Gathering or by playing 600 VS. matches.

By tradition, Ganondorf as a playable character is featured on his personal three trophies. His normal trophy is acquired by beating the Classic mode with Ganondorf on any difficulty, and his Smash Red and Smash Blue trophies are acquired the same way by beating the Adventure and All-Star modes, respectively.

Ganondorf [Smash]
Since he's slow and can't jump very high, Ganondorf relies mainly on his immense physical strength to overwhelm his enemies. His great weight also makes him a difficult foe to send offscreen. Ganondorf's Warlock Punch is slow but absurdly powerful, and when he strikes with his Gerudo Dragon, enemies rise skyward enveloped in dark flames.

Ganondorf [Smash]
Ganondorf's slow speed works against him in single combat, but in melees, his crazy power lets him earn his keep with innumerable KOs. Ganondorf can't strike quickly, but each blow he lands adds up. Ganondorf is at his quickest when he uses the Wizard's Foot, and his Dark Dive blasts foes in a burst of dark energy.

Ganondorf reappears in Super Smash Bros. Brawl as a playable unlockable character, this time using his Twilight Princess appearance. Some of his attacks have changed from his Melee set and have undergone large aesthetic changes to resemble various hand-to-hand moves he has used in the Zelda franchise, while his other attacks are similar to their Melee counterparts.

In Brawl, his attacks are noticeably more sluggish and have less reach. His jumping ability, walking/dashing speed, and his air speed have also been hindered, which hinders his mobility rather severely. His rolling dodges, once on par with Captain Falcon's (from whom they were inherited), are now slower and gain less distance. His horizontal recovery is worse due to the Wizard's Foot no longer restoring his midair jump. Additionally, many of Ganondorf's attacks were weakened in terms of damage and power. In this game, he has a new side special known as Flame Choke, which involves Ganondorf grabbing an opponent, and then throwing them downward.

Beast Ganon also appears as Ganondorf's Final Smash. Once the Smash Ball is retrieved and activated by the player, Ganondorf immediately transforms into the Twilight Princess rendition of Beast Ganon. In beast form, he stomps his front legs on the ground, immobilizing any foes in his wake, pounding them down into the earth, making them unable to perform any actions. The beast then charges straightforward into the direction he was last facing when the Final Smash was activated.

Ganondorf has a trophy that is awarded each time the Classic Mode is completed with Ganondorf on any difficulty. See Beast Ganon for the trophy description of Ganondorf's Final Smash:

Ganondorf
A man who wants to use the power of the Triforce to conquer the world. In Twilight Princess, he gives strength to the Twilight King, Zant, and tries to change the land into a world of darkness. He possesses Zelda, transforms into a magical beast, and attacks Link. In the end, however, Link deals him a finishing blow and defeats him.

Ganondorf (Wind Waker)
The king of evil. Ganondorf aims to collect the Triforce pieces and rule the world. Already in possession of the Triforce of Power, he secures Zelda and her Triforce of Wisdom, thus luring Link to his castle. However, he is ultimately defeated by Zelda's Light Arrows and Link's Master Sword. 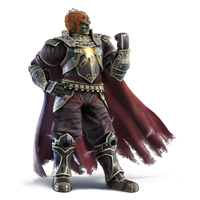 Ganondorf reappears as a playable character in Super Smash Bros. for Nintendo 3DS and Wii U, being an unlockable character in the 3DS version, but a starter in the Wii U version. He reuses his Twilight Princess appearance, but with his glowing chest wound from that game clearly visible and a more tattered cape. His moveset appears to be similar to its Brawl incarnation, but has been buffed to make him a better character.

Ganondorf
The King of Evil that awaits Link at the end of most of his adventures. Ganondorf possesses the Triforce of Power. In Smash Bros., he makes up for his low speed with devastating power. The strength of his blows can knock back most opponents. Get close with a dash attack, and pummel your foes!

Ganondorf (Alt.)
Being the powerhouse that he is, the King of Evil is a great choice for free-for-alls. His Warlock Punch delivers a thunderous, dark-energy-fueled blow from his left hand. Unfortunately, left-handed dark-energy-fueled blows take some time to charge. You can turn to face someone as they cowardly try to hit you from behind.

Ganondorf (Ocarina of Time)
The Great King of Evil who plots to steal the Triforce from the Sacred Realm and rule Hyrule. When Link reveals the secret entrance to the Sacred Realm, Ganondorf gains entry and acquires the Triforce of Power. With it literally in hand, his only concern is Link and Zelda stopping him.

Main article: Ganondorf (SSBU)
Ganondorf returns as a fighter in Super Smash Bros. Ultimate with his design from The Legend of Zelda: Ocarina of Time. His moveset also includes his sword.

Retrieved from "https://supersmashbros.fandom.com/wiki/Ganondorf?oldid=600376"
Community content is available under CC-BY-SA unless otherwise noted.