Freezie as it appears in Mario Party 8

The Freezie is an enemy in the Mario Bros. arcade game and all of its subsequent remakes. It appeared in later levels to complicate the terrain. It moves along the platforms, then eventually covers one of them completely in ice, destroying itself in the process. This makes the platform extremely slippery for Mario and Luigi to walk on. If Mario made contact with a Freezie, he loses a life. The only way to defeat it was to jump into the platform below it.

When a Freezie appears in Super Smash Bros. Melee, it slides across the stage on its own, speeding up if it encounters a slope. When picked up and thrown, any character hit by the Freezie will be frozen and knocked upwards. Freezies can break if attacked before being picked up. Freezies could easily KO a character at respectable percentages, as well as keeping characters trapped long enough to take a lot of damage.

Freezies slip and slide along smooth surfaces and will happily slide off the edge of a stage if left alone. In Mario Bros., they would stop and freeze portions of the ground; in Super Smash Bros. Melee, they can be picked up and hurled as weapons. Hit a foe with a Freezie, and he or she will be temporarily encased in a huge block of ice. 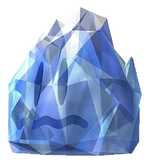 The Freezie item in Super Smash Bros. Brawl retains the same design and method of use from its Super Smash Bros. Melee counterpart. However, their knockback and freeze time have been considerably reduced, and frozen characters fall much slower, making it harder to KO with.

An item that freezes people. If you're frozen, you can't lift a finger to defend yourself. You can break out of ice by shaking the Control Stick back and forth. Hit someone with a Freezie, and you'll hear delightful sound declaring your success, but frozen enemies don't fly very far. Freezies tend to break easily when carried.

Use this item to make a game of freeze tag chillingly literal. Once thrown, the first character to touch the Freezie will be frozen solid, turning into an easy target for a beating. If you happen to be on the receiving end, it's time to try to move around quickly to warm yourself up! 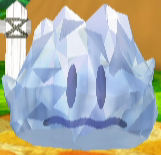 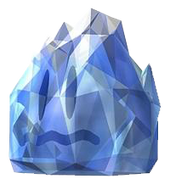 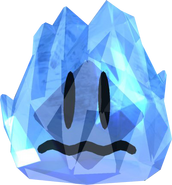 Freezie in Super Smash Bros. for Nintendo 3DS/Wii U.

Wario with a Freezie in Super Smash Bros. Brawl.