The Franklin Badge (フランクリンバッジ, furankurin bajji?) is an item in Super Smash Bros. Brawl. It was revealed on Smash Bros. DOJO!! on August 10, 2007.[1] It can reflect projectiles.

The Franklin Badge is an item originating from the MOTHER/EarthBound series. Named after Benjamin Franklin, it is capable of reflecting all projectiles back at their caster. In the case of the projectile not being reflectable (like Zelda's Din's Fire (or explosions in general), Charizard's Fire Breath or the fire from Superspicy Curry) the badge will absorb all the damage instead.

In Brawl, you can put a Franklin Badge anywhere on your body which will protect you from projectiles. When the Franklin Badge is equipped, you can notice the badge emits light in a sparkling fashion, and it can be noticed by other players, but it's not very easy to spot. However, the item will not stay on you the entire match, so players must be sure to notice when it disappears from their character's body or if the sparkling light has vanished.[1]

The Franklin Badge can also be selected on the Special Brawl mode. When selected in this mode, the Badge remains for the entire duration of the match.

A badge you can put on to gain the ability to reflect all projectiles. It has exactly the same effect as other reflectors in the game, like the one Fox uses. In MOTHER, it was used to deflect PK Beam when fighting Starman Jr. In Earthbound, it was used to counter Thunder attacks. The lightning bolt on the badge is proof of its capacity. Its importance and usefulness made a deep impression on players.

While not the most flashy of accessories, the Franklin Badge is actually incredibly useful. When wearing it, any projectiles launched your way will be reflected harmlessly off you. There is no downside, so grab this as soon as it appears. Don't get too confident, though--the bonus doesn't last long.

The Franklin Badge was originally from MOTHER, it was given to the main protagonist Ninten after saving his friend Pippi from Pseudo Zombies in the Mother's Day Cemetery. There was also another Franklin Badge hidden in Duncan's Factory. It could be used to defeat the boss Starman Jr. by deflecting the boss' PK Beam γ (gamma) that would usually be a one-hit KO.

It later appeared in Earthbound when Ness met Paula for the first time. She would give the Franklin Badge to him to protect him while he tried to free her. Since PK Beam was removed from EarthBound, the Franklin Badge would now reflect any PK Thunder and most other thunder attacks.

In MOTHER 3, it first appeared in early Chapter 7 as a mysterious "Courage Badge" that was owned by Flint, Lucas' dad. The grave-digger, Nippolyte, gave this to Lucas on behalf of Flint. Close to the end of Chapter 7, a Mr. Saturn took the badge to polish it. Just before the end of Chapter 7, the Mr. Saturn returned it and it was revealed that the Courage Badge was actually a Franklin Badge. It was used to deflect PK Thunder and most other thunder based attacks (notably the Masked Man's lightning bolts). The Franklin Badge was more important to the plot in Mother 3 than in any other Mother game.

Curiously in MOTHER the description of the item says that it was used by Benjamin Franklin during his experiments with lightning.

It is also interesting to note that while Lucas had the unpolished Franklin Badge in his inventory, he would not be protected from any thunder attacks. This suggests that the rust on the badge stopped it from reflecting thunder. 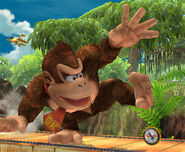 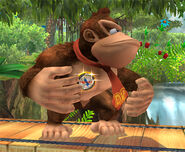 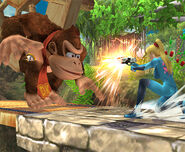 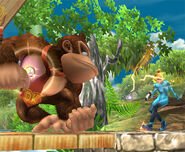 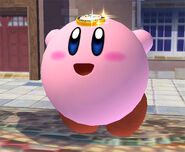 Toon Link wearing the Franklin Badge in Super Smash Bros. 3DS/Wii U
Add a photo to this gallery
Retrieved from "https://supersmashbros.fandom.com/wiki/Franklin_Badge?oldid=591940"
Community content is available under CC-BY-SA unless otherwise noted.