Fox McCloud made his debut in Star Fox for the Super Nintendo Entertainment System in 1993. The leader of the Star Fox team, Fox led his team through the Lylat System to save the galaxy from the evil Andross. The game was a huge hit and has led to several sequels. Star Fox 2 would see Fox once more commanding the team (along with two new recruits, Fay and Miyu) into battle against a revived Andross. This would also mark Fox's first encounter with Wolf O'Donnell and his team.

Though this sequel to Star Fox was shelved until 2017, Fox would return in the Nintendo 64 smash hit Star Fox 64 which revealed some key details about Fox's past in this 'updated' Star Fox. Fox's father, James McCloud, who was renowned as one of the greatest pilots of his time, was the leader of the original Star Fox team. Upon investigating the planet Venom, James was presumed killed by Andross. Seeking to avenge his father, Fox formed a new Star Fox team which consisted of his teammates Falco Lombardi, Peppy Hare (who was a member of the original team), and Slippy Toad. At the end of Star Fox 64, Fox independently fought and killed Andross at the end of the adventure. Depending on the path taken, Fox would either face a robotic duplicate of Andross, or the evil scientist would be reduced to a floating brain. In the latter final battle, Andross attempts to drag Fox to the grave with him, though Fox is saved at the last minute by the apparent ghost of his father, who leads him out of Andross' rapidly crumbling base.

After this, Fox would be featured in his first fighting game in the original Super Smash Bros. and has appeared in every installment of the series since.

Fox McCloud would then be featured again in Star Fox Adventures with a new Star Fox member, Krystal. This game was a departure from the original Star Fox games as it was more of an action/adventure game, which saw Fox rescuing Dinosaur Planet from (unknown at the time) Andross who was seeking to revive himself after the Star Fox team became a pale shadow of its former self. During his quest, Fox meets and falls in love with a blue vixen named Krystal. After this, Fox would return in Star Fox Assault, which saw a reinvigorated Star Fox team saving the galaxy from a new threat called the Aparoids. A year later, Fox would return in Star Fox Command, although his relationship with Krystal sours when he breaks it up for her safety. Angered, Krystal joins Star Wolf out of spite, though Fox tries to bury his angst in order to help stop the Anglar Empire, the latest threat to the Lylat system. Depending on player actions, Fox can either reconcile with Krystal and retire to a happy family life, or lose all the glory to Star Wolf and instead become a professional racecraft driver with Falco.

Fox appears in the original Super Smash Bros. as one of the starting eight playable characters. He is based off his appearance in Star Fox 64.

Fox is a weak, but fast character. His Neutral B move is the Blaster which sends one powerful energy beam at his opponents. His Up B is the Fire Fox which envelops Fox in flames and sends him flying in any direction. His Down B is the Reflector, which serves as both an offensive and defensive move (it reflects any projectiles that come in contact with it). Fox is 3rd best in this smash game with great matchups.

Following his dead father's footsteps as the young leader of the Star Fox Team, Fox McCloud's piloting of the super-high-performance combat ship ARWING for the Lylatian System is still fresh in our memories. His one weakness may be his difficulty earning the trust of his teammates.

Fox returns in Super Smash Bros. Melee, retaining his role as a starting playable character. His appearance is once again based off his design in Star Fox 64.

His moveset has not changed much, though his blaster has changed. The blaster will not cause his enemies to flinch, but he can now rapid-fire his blaster without having to recharge it after every shot. His new Side B move is the Fox Illusion which causes Fox to rush ahead in a blur and can be used as a recovery move.

By tradition, Fox as a playable character is featured on its personal 3 trophies. Its normal trophy is acquired by beating the Classic mode with Fox on any difficulty, and its Smash Red and Smash Blue trophies are acquired the same way by beating the Adventure and All-Star modes, respectively.

Fox McCloud [Smash]
Fox is among the quickest and nimblest of the Smash Bros. characters. His speed is offset by low firepower, however, and he's better at one-on-one fights than melees with multiple foes. His Blaster is unique: it does damage but it doesn't make enemies flinch. His Fox illusion is best used as a surprise attack.

Fox McCloud [Smash]
Fox falls quickly, so he's a tough target to strike from below; however, this advantage can work against him when he goes flying sideways. You can use the Control Stick to set the direction of the Fire Fox technique while it's charging up. On a side note, Fox is also much lighter than he was in the N64 Super Smash Bros. game. 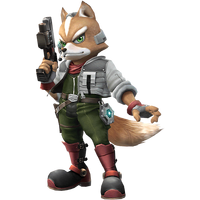 Fox is a starting playable character in Super Smash Bros. Brawl. His appearance this time is a mix between his Star Fox Assault and Star Fox Command appearances, but his fur has the color scheme from Star Fox 64. It is also the first Super Smash Bros. game where Fox's eyes are their proper color (green).

His special moves are unchanged. Fox additionally now has a Final Smash, in which he summons the Landmaster tank. Once inside, Fox can use the tank to move around, hover, fire shots, and "do a barrel roll". The tank itself is treated like a platform, so other characters and items can stand on top it.

Fox
The leader of the commando unit for hire known as Star Fox. He uses both the team's mother ship, the Great Fox, and his personal Arwing fighter to challenge the evil scientist Andross. He made his name as an ace pilot but has lately shown himself also to be an adventurer with a knack for hand-to-hand combat.

Fox (Assault)
The leader of the one and only Star Fox team. Fox McCloud has superb battle skills and is an expert pilot of both the Arwing and Landmaster. In on-foot battles, Fox starts with a blaster and continues on with four other types of weapons as he fights through the Aparoids. Fox also demonstrates his skills in air combat using the plasma cannons on the Arwing. 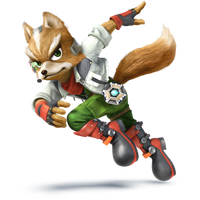 Fox is an Starter character in Super Smash Bros. for Nintendo 3DS and Wii U. Much like in Brawl, Fox's appearance is primarily based on Star Fox Command, but has been given higher quality fur visuals, much like Donkey Kong.

Fox has been nerfed in this game as most of his attacks now have more lag along with his finishers being weakened in terms of power and knockback. However, his recovery options has been improved as Fox Illusion no longer puts him in a helpless state and Fire Fox's traveling distance has been slightly increased.

Fox
Fox is the leader of the mercenary unit Star Fox, often enlisted to defeat the evil Andross. His piloting skills are top notch, but in Smash Bros. he brings speed and fast attacks to the battle. His Reflector move allows him to turn projectile attacks against his foes, increasing their power for a punishing blow.

Fox (Alt.)
Fox is at home in the air, and many of his moves, like his up smash, Flip Kick, will send foes up there. It's great for KO'ing a damaged opponent. Another handy move is his up special Fire Fox. The flames that surround Fox deal damage to nearby foes, and you can launch yourself in any direction once charged.

Fox (Assault)
When Andrew Oikonny and the remnants of his uncle Andross's army use guerilla tactics to stage a rebellion, the Cornerian forces find themselves under a lot of pressure. Fox and his unit arrive to save the day, only to encounter an even greater threat. Can Fox handle the incoming assault from this mysterious new foe?