It deals little damage and has very little knockback, but can knock an enemy upwards. The dash is so fast that if used facing an edge at the end of a stage, the attack will cause Fox to dash over the ledge, resulting in a Helpless state, and usually causing a Self Destruct, which won't happen anymore in 3DS/Wii U.

The move may also be used as a useful recovery technique, since the move can quickly cover about half of the length of Final Destination and makes up for Fire Fox's easily being edgeguarded. However, unlike the former, Fox Illusion normally halts all momentum after a dash, which can sometimes give less recovery. 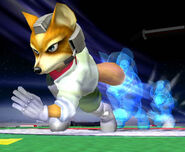 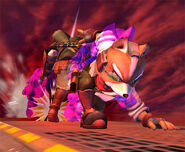 Fox Burst is one of Fox's Side Special Moves that can be used via customization. Fox does a dash that deals no damage, but an explosion occurs where Fox stops.

Wolf Flash is one Fox's Side Special Moves that can be used via customization. Fox travels at an angle and when it hits, it meteor smashes opponents at the end of the move.

The opponent can be hit by Falco or any one of the afterimages. If the opponent is hit while in midair, they will be spiked. Despite the fact that the move is an attack, it is rarely used as such, instead being primarily used as a recovery technique due to its speed.

While not a recommended strategy, the move's spiking property can be used to deliver a KO. It is recommended that the enemy has around 80% damage, and that Falco be out from the stage so that he can approach towards the edge to safety. This technique is more effective against some characters than against others. It can also be used for a very swift approach. Short hopping slightly increases the distance traveled. It can be reversed by quickly tapping the control stick in the opposite direction. The sparkle will stay in its original position, which can lead to mindgames.

Falco Phase is one of Falco's Side Special Moves that can be used via customization. Falco can't be hit while dashing, but the move doesn't hit opponents, either.

Falco Charge is one of Falco's Side Special Moves that can be used via customization. Falco travels a shorter dash that hits much harder at the beginning of the move.

It appears to work the same way as Fox Illusion and Falco Phantasm. However, the attack goes a farther distance, and sends Wolf upwards around 30 degrees. The attack appears to be weaker, doing only minor damage (normally 3%). However, if there's an enemy in the spot where Wolf reappears, the attack is electrified and deals considerable damage while stunning the enemy, as well as spiking or causing knockback (10% if hit at the end, 15% if Wolf ends in the character model of his foe, 18% should one land both the beginning hitbox and the final hitbox).

Wolf Flash has two cancel frames. This removes the sweetspot of the attack, but greatly increases the horizontal reach of the move for recovery.

Should opponents be below Wolf...

...they will be sent to their doom.

Wolf Flash has characteristics that can cause a number of unusual outcomes when performed near ledges.

While the move seems to be exclusive to the Super Smash Bros. series, it could be based on the Arwing's ability to increase its speed. Wolf uses a move reminiscent of this in Star Fox: Assault's multiplayer mode as his "roll".

Fox Illusion (along with Falco Phantasm and Wolf Flash) can be cancelled with the B button. In each of these cancellations, the characters keep their horizontal momentum in the air. There are three points during the startup lag frames which the player can cause the dash to cancel in which these moves can be cancelled, but it is most easily done with Fox, due to his longer beginning lag.

The first part for cancellation is right before he starts the dash. Fox will move just about 3 feet as if attempting to stop himself from dashing, stalling out if in midair. The second part is in mid-dash; canceling the attack now will send him slightly less than the normal Illusion distance, but his momentum will still carry him forward. The last part is right before the dash is completed and if cancelled now, Fox will move slightly farther than the normal illusion distance due to leftover momentum. However, with practice, the player can control exactly when Fox will cancel. Since all three types of canceled Illusions can hurt the opponent, this is both useful to pseudo-wavedash while attacking (due to its sliding properties of landing on the ground), which can save him from punishment, as well as recovery, thanks to momentum leftover from the attack.