Fox (Super Smash Bros. for Nintendo 3DS and Wii U)

This article is about Fox's appearance in Super Smash Bros. for Nintendo 3DS and Wii U. For other uses, see Fox McCloud.

Kenji Nojima
Fox (フォックス, Fox) is a starter character and returning veteran in Super Smash Bros. for Nintendo 3DS and Wii U. He is one of the "Original 12" characters that have appeared in every Smash Bros. installment. He was confirmed during the E3 2013 trailers on June 11th, 2013. Kenji Nojima reprises his role in the Japanese version from Brawl, with his re-recorded voice clips. Mike West, his original English voice actor who voiced him in Star Fox 64 and reprised his role in the 3DS remake, Star Fox 64 3D, now voices him, replacing Jim Walker from Brawl.

Fox currently ranks 7th on the tier list (tied with Sonic). His position here places him above his previous position in Super Smash Bros. Brawl. He is fast, has a great punish game and good kill power, but has a predictable recovery, is comboed easily as he is a fast-faller, and lacks kill confirms as higher percents.

Fox is Rushdown fighter, capable of employing efficient hit and run tactics to pressure his opponents, being able to quickly get in and out of combat as the situation demands, punishing opponents accordingly. The versatility of his moveset also allows for decent mix-ups.

His greatest asset is his mobility: having one of the fastest running speeds in the game, as well the top falling speed, Fox can quickly pull enemies into deadly combos. Many of his aerials can auto-cancel, which, combined with his good frame-data, grants him a formidable approach while leaving little room for punishment.

Fox's ground game is solid and very fast, with all his Tilts being excellent poking and/or combo tools. Neutral Attack is fast, with the first two hits pushing Fox slightly forward, while also allowing him to frame cancel into grabs. Forward and Down Tilt are great for poking, while Up Tilt can combo with itself at low to mid percentages, and is also an excellent setup for juggling. His Dash Attack, while punishable, is quite fast and covers good range.

His Smash Attacks have considerable lag, but are nonetheless useful. Forward Smash covers good range, however it has one of the lowest base knockbacks in the game. Up Smash, on the other hand, is one the strongest in the game, being Fox most potent finishing move. Down Smash covers a decent range, while dealing horizontal knockback, making it useful for edge-guarding and punishing rolls.

The utility of his Aerials is complemented by his ground moveset. His Neutral Aerial is a reliable Sex Kick that can lead into many ground finishes, including Up Smash. Forward Aerial multi-hit capacities can be used to pull down opponents and lead into useful gimping and footstool setups. Back Aerial is a potent finisher, mostly to its safety when auto-cancelling. Up Aerial has a small hitbox and sweetspot, but is surprisingly strong, enough to KO opponents below 100% near the upper blast line. Finally, Down Aerial is his signature "drill-kick", being excellent for damage racking and leading into many grab and finishing setups.

Fox's grabs, while not very powerful or very useful, can lead into interesting follow ups and reads. While Forward and Back Throws are used to get opponents offstage, Up Throw can set up for occasional Up Aerials at low percentages when reading air dodges. Down Throw, on the other hand, can lead into many, but not guaranteed, follow ups, such as Forward and Up Aerials.

His Special Attacks gives him a combination of offense and defense. Blaster is his signature rapid-fire move, allowing him to rack damage quickly while forcing opponents to approach. Fox Illusion is excellent for recovery as it can be used twice in the air, and also allows Fox to quickly engage (or disengage) on opponents, specially if used as soon as jumping (when activated right after the jump squat), which will allow Fox to do a "low-air" version of Fox Illusion, negating most of its ending lag (as the landing lag is lower than the ending lag). Fire Fox is mostly useful as a mix-up for recovery, and is also his only means of vertical recovery. Finally, Reflector is an all-purpose move aside its obvious reflecting properties can also be used as a mix-up for combos.

Fox, however, his several weaknesses. Being light, his endurance is very low, which allows for many characters to KO him before 100%. This, combined with his fast falling speed, makes him very susceptible to combos and juggles. As Fox relies heavily on racking up damage, he might find himself in disadvantage against opponents with better KO options and higher survivability. Another heavy penalty for Fox is the lack of reliability in his KO moves; despite having many options that have high power, they tend to be predictable or requiring specific sweetspots in order to deal the maximum knockback. His grab game is also very mediocre, with no guaranteed follow ups nor kill throws, which forces him to rely mostly on baiting opponents into air dodges to get follow ups after throws. Lastly, his recovery, while high and versatile, is predictable and susceptible to gimping and Meteor Smashes.

Overall, Fox potent fighter thanks to his high mobility, fast attack speed, strong combo game and decent finishers. He has no true crippling weaknesses that really hurt his game, aside from his poor survivability and linear recovery. Fox players must be aware of these weaknesses and use Fox aggressiveness to prevent opponents from reacting.

Appearance-wise, Fox is the same as in Brawl, but with more texture details in his clothes. The visor in his headset is also slightly smaller. His Blaster design has changed

◾Jab – Punches with an arm, then the other, then unleashes a series of rapid kicks, which end in a stronger one. 2%, 1%, then 1% each kick, then 2% on the last kick. Damage varies depending on how many kicks connected during the infinite; 8% at minimum.

◾Up Tilt – Quickly lifts one of his legs, striking from his back all the way to his head. Loses power gradually as the move ends. 9%, 6% at end.

◾Down Tilt – Fox hits forward with his tail. Loses power with range. 8% up close; down to 6% max range.

◾Forward Tilt – Kicks forward from the side. Can be tilted. Gains power with range. 6% up close; 8% max range.

◾Up Smash – Does a backflip, kicking upwards. The attack is fast and has a lot of launch power, even when uncharged. Not only that, but Fox can use it while running to slide forward a little as he uses it, covering more area. One of Fox's best means of KO. The attack does less damage to opponents to his back. 16%, 11% at his back uncharged; 22%, 15% at his back fully charged.

◾Forward Smash – Releases a powerful kick that projects Fox forward. Covers a wide area. The very end of the attack does less damage. 14%, 11% at the tip uncharged; 19%, 15% at the tip fully charged.

◾Down Smash – Does a split, striking at both sides. Knocks opponents away from him at a very low angle. 14-19%

◾Dash Attack – Performs a forward flying kick. 6% at beginning of move, 4% at end.

◾Ledge Attack – As he climbs the edge, he projects himself forward and does a frontal kick with both legs. 7%

◾Get-Up Attack – As he gets up, punches to his front and kicks at his back. 7%

◾Down Aerial – Spins around, hitting multiple times. 11% when all hits connect

◾Forward Aerial – Does 5 airborne kicks. 7% when all hits connect

◾Back Throw – Throws the opponent backwards and shoots them thrice with his blaster. The shots can be intercepted by other fighters, damaging them instead of the one thrown. 8%

◾Down Throw – Slams the opponent on the ground and shoots at them, this can lead into a combo with the Reflector if hold the move's button combination during the throw. 7%

◾Up Throw – Throws the opponent upwards and shoots them thrice with his blaster. The shots can be intercepted by other fighters, damaging them instead of the one thrown. 8%

Fox is the leader of the mercenary unit Star Fox, often enlisted to defeat the evil Andross. His piloting skills are top notch, but in Smash Bros. he brings speed and fast attacks to the battle. His Reflector move allows him to turn projectile attacks against his foes, increasing their power for a punishing blow.

Fox is at home in the air, and many of his moves, like his up smash, Flip Kick, will send foes up there. It's great for KOing a damaged opponent. Another handy move is his up special Fire Fox. The flames that surround Fox deal damage to nearby foes, and you can launch yourself in any direction once charged.

Originally designed for exploration, the Landmaster in Fox's Final Smash has been converted into an ultra-high-performance, anti-air, rolling combat vehicle. When Fox hops aboard, he can drive or roll into foes and blast them with cannon fire. It can even fire in midair. And best of all, Fox is safe from damage inside this metal beast! 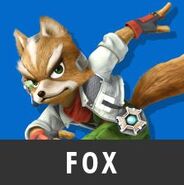 Fox is ready for the final battle!

Even intergalactic heroes need their rest

Fox along with Bayonetta.

Fox along with Peach Link and Bayonetta.

Fox along with Peach and Link.

Fox along with Kirby holding the items Fairy Bottle and Steel Diver. 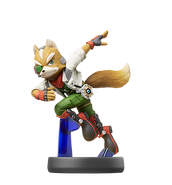 Fox amiibo in the packaging