This article is about Fox's appearance in Super Smash Bros. Ultimate. For other uses, see Fox McCloud.

Fox's opponents are all space travelers.

Fox was among the fighters that were on the cliffside that gathered to defeat the army of Master Hands.

During the opening cutscene, Fox was issuing orders to the other fighters, telling them "[not to] let a single one [of the Master Hands] get away". Fox was also present on the cliffside when Galeem unleashed his beams of light. He was vaporized offscreen, and was placed under Galeem's imprisonment alongside the rest of the fighters (excluding Kirby). A puppet fighter cloned from him is later seen along with ones cloned from Simon, Mario and other fighters.

Fox is unlocked near a heart-shaped lake. The player must defeat either Nyna's or Panther Coroso's spirit to access his unlock battle. Unlocking Fox will allow the player to access the red switch which opens the red gate leading towards the Temple of Light sub-area as well as clearing a path blocked by rocks. This makes him one of the few mandatory fighter unlocks.

Fox is fought on the Omega version of Corneria, with a Shield spirit and a power of 3,770.

He is later seen again alongside Mario and several other fighters, making their last stand against Galeem and Dharkon. In the bad ending where Galeem emerges victorious against Dharkon, Fox is among the fighters witnessing the world becoming engulfed in light.

Fox during his freefall.

A close-up of Fox.

Fox along with Kirby on the Corneria stage.

Fox along with Falco and Rosalina in the Reset Bomb Forest stage.

Fox along with Kirby Falco and Bayonetta in the Corneria stage. 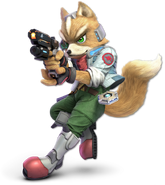 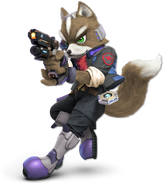 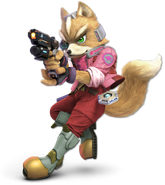 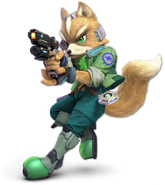 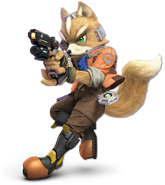 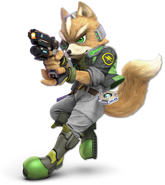 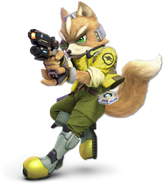 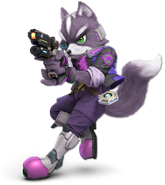 07 Fox – Super Smash Bros. Ultimate
Add a photo to this gallery
Retrieved from "https://supersmashbros.fandom.com/wiki/Fox_(Super_Smash_Bros._Ultimate)?oldid=580574"
Community content is available under CC-BY-SA unless otherwise noted.