This article is about Fox's appearance in Super Smash Bros. Melee. For the character in other contexts, see Fox McCloud. For information about Fox's clone, see Falco.

Steve Malpass
Announced at E3 2001, Fox (フォックス, Fox) is a playable starter character in Super Smash Bros. Melee. He is emblematic of speed, dominating foes with his rapid attacks, quick movement and overpowering offense in all areas of his game. He is placed 1st on the Melee tier list due to these advantages. He has no losing matchups on the character matchup list (as does Falco), with only three being considered even (Falco, Marth and Samus).

Despite all of these pros, Fox is by no means flawless. He is notorious for being an extremely difficult character to master. Almost all of his attributes reflect an unbridled speed, requiring quick fingers and reflexes to master. Players need most concentration to SHFFL aerials and Reflector combos with efficiency, if not done properly, Fox will get vulnerable to grabs by an opponent, which almost certainly means a painful chain throw or combo. Because of these struggles, Fox must remain slippery, unpredictable, and above all, faster than his opponent to win. 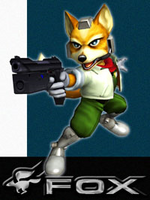 Fox is most notorious for his speed. He has the second fastest dash speed, tied with Marth for the fastest walking speed, the fastest normal falling speed, the third fastest fast falling speed, fast dash-dancing, and fast attacks. His fast fall and low, fast short hop contribute to an extremely quick SHFFL. Fox has high-damage and flexible combos, including several infinite combos (e.g. his famous waveshine infinite). When it comes to KOing, Fox has very powerful up-sending finishers (particularly his Up Smash and his Up Aerial), and his shine spikes are deadly against the majority of the cast. Projectiles are generally ineffective against Fox due to his Reflector, which comes out in one frame, making it tied for the fastest move in the series with Jigglypuff's Rest and Falco's own Reflector. Fox's Blaster can easily rack up damage because it is very quick and covers a great distance. However, it does not make opponents flinch. Thus, it can't be used to break approaches. Fox has highly variable approaches, including SHDL/SHDB approaches, SHFFL'd aerials, and a good wavedash. Fox also can Wall jump.

Although Fox has significant strengths, he also has major weaknesses. Fox is very easily KO'd due to a combination of being a lightweight, having the slowest air speed (along with Falco), and having the fastest falling speed. Additionally, his recovery can be caped and edgeguarded easily due to its linear nature unless it's timed correctly. His extremely fast falling speed makes him easy to combo and chaingrab (although he is difficult to shield grab because of his Reflector). A professional Fox player must do everything quickly to avoid getting nailed by his disadvantages.

Fox received a mix of buffs and nerfs upon making the transition between games but was overall buffed, with an increase in K.O power, recovery, and movement options.

Like other characters, Fox has received some changes in the PAL version of Melee, which nerfed him overall, but it does not severely affect his tournament viability, as he is also ranked 1st on the PAL tier list.

In addition to the normal trophy about Fox as a character, there are two trophies about him as a fighter, unlocked by completing the Adventure and All-Star modes respectively with Fox on any difficulty.

Fox McCloud (Smash Red)
Fox is among the quickest and nimblest of the Smash Bros. characters. His speed is offset by low firepower, however, and he's better at one-on-one fights than melees with multiple foes. His Blaster is unique: it does damage but it doesn't make enemies flinch. His Fox illusion is best used as a surprise attack.

Fox McCloud (Smash Blue)
Fox falls quickly, so he's a tough target to strike from below; however, this advantage can work against him when he goes flying sideways. You can use the Control Stick to set the direction of the Fire Fox technique while it's charging up. On a side note, Fox is also much lighter than he was in the N64 Super Smash Bros. game.