The Super Smash Bros. Wiki needs a logo and you can help! The current logo is just a "possible logo". All you need to do is make an image that has a width of 150 pixels and a height of 150 pixels and it must be in .png format. You can read more at this page on Wikia Central.--Richard1990 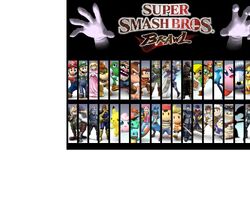 Please sign your name under the logo you wish to be used.

Hey everyone. I'm a Wikia Helper (see my detailed introduction on Dtm142's talk page. I just found this forum topic and wanted to comment on a possible wide logo (size: 266x75 default location: Wiki_wide.png) to be used with the Quartz skins, because the SSB Wiki doesn't have one. At first, I made this one by copying the look of the current monobook logo. Then I noticed this image that Bonko uploaded, which I thought looked good since it uses the SSBB logo, so I made this logo as a possible permanent wide (Quartz skin) logo. Let me know which of those two you like better (Wiki_wide.png or Wiki_wide2.png), and I'll set it up as the Quartz logo. JoePlay (talk) 02:00, 28 December 2007 (UTC)

I agree, so I made it the new permanent wide logo. Since the logo size for the monobook skin is 135x135, which is what I assume this topic is about, I made one for consideration...

Cool, it is done. If there is any other image/logo work you guys need done, or if you need help with anything, feel free to leave a message on my talk page. JoePlay (talk) 19:24, 29 December 2007 (UTC)

I see that you replaced the logo image but it is not showing up, the top-left corner is blank. Is this problem effecting anyone else! Bonko24 20:10, 29 December 2007 (UTC)

I like the first one because there are a lot of pictures of link (go ahead, say I'm obsessed) though it is a little stretched out. also, how many votes are we going to? PeetzaLink 19:17, 16 April 2008 (UTC)