For the other online mode, see For Fun. 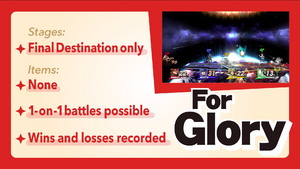 For Glory, known as Serious (ガチ, Gachi?) in Japan, is one of the two online modes in Super Smash Bros. for Nintendo 3DS and Wii U when playing With Anyone, with the other mode being For Fun. In this mode, all matches are played on Final Destination or on Omega forms of other stages, with no items naturally spawning, and with character customization set to "off". Unlike in "For Fun", both wins and losses from matches are recorded in this mode, alongside other statistics.

There are three different modes available in For Glory: Free-For-All, Team Battle, and 1-on-1.

In Team Smash, the player will team up with a random player to face against another team of 2 players in a 2-minute match. The match won't start if there is no fourth player. In Super Smash Bros. for Wii U, the player can choose to fight with a second player playing on the same console to fight against 2 other players who are playing on their console.

In 1-on-1, only the player and their rival is present. The rules are set to a 2-stock match with a 5-minute time limit in case the match lasts too long.

For Glory has received divided opinions from the community. While many people praised it for its relatively competitive ruleset that encourages balanced matches online, it still received criticism particularly from heavily competitive players, for encouraging only a small subset of competitive play, with the presence of only flat stages being over-centralizing towards certain styles of gameplay. The mode has additionally been criticized for having team attack off and running time matches instead of the vastly preferred stock matches in its team mode. Nevertheless, opinions are significantly higher than Brawl's online play (which was mostly highly criticized), as For Glory enables one-on-one stock matches with items off on a neutral stage to be played online, compared to Brawl which allowed none of these things. For Glory was heavily criticized for having very salty players which most consist of adults, while some others are kids.