For the other online mode, see For Glory. 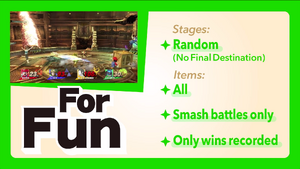 For Fun, known as Enjoy (エンジョイ, Enjoi?) in Japan, is one of the two online modes in Super Smash Bros. for Nintendo 3DS and Wii U when playing With Anyone, with the other mode being For Glory. In this mode, players fight each other in four-player free-for-alls or two-on-two team battles, with all items turned on. All stages are playable except for Final Destination; stages are selected at random with no player choice. In the 3DS version, some stages are altered to remove hazards that may cause lag in online play. In this mode, only the player's wins are recorded.

There are two different modes available in For Fun: Free-For-All and Team Battle.

In Free-for-all, the player will face against 3 other players in a 2-minute match. If neither a third or a fourth player joins a group, the match will automatically start after 60 seconds.

In Team Smash, the player will team up with a random player to face against another team of 2 players in a 2-minute match. The match won't start if there is no fourth player. In Super Smash Bros. for Wii U, the player can choose to fight with a second player playing on the same console to fight against 2 other players who are playing on their console.

While For Fun received a much more positive feedback than Basic Brawl, it still has been met with some criticisms, most notably the inability to play with fewer than four players (resulting in frequent online lag), as well as commonly hosting taunt matches despite the presence of a hard-coded taunt limit.