Artwork of a Flying Man from the Mother strategy guide

Flying Men are a species of humanoid bird creatures in the EarthBound series, specifically Mother/EarthBound Beginnings and Mother 2/EarthBound.

Flying Men are bipedal humanoid bird creatures that live in groups inside a house within Magicant. They are often characterized as kind and helpful people who are willing to assist Ninten and Ness during their time visiting Magicant, even briefly joining their party (though this is optional). When in the group, they're Level is already at the max of 99, though the enemy Groucho can strangely still grant them additional EXP points even though it is virtually useless. Only five Flying Men are available to join; when one is killed in battle, a gravestone will be placed by their home and another will replace him, repeating until all five have been defeated. In EarthBound, each gravestone inscription gets more and more dismal with each death, with the final one essentially chastising the player for letting them all die.

In EarthBound Beginnings and EarthBound, the Flying Men introduce themselves to Ninten and Ness as their "Courage". This is keeping in line with the fundamental nature of Magicant, which is a manifestation of its visitor's unconscious mind.

Flying Men appear as hazards in the Magicant stage. During the battle, one will come out of their house on the top right platform and stand idly; if touched or attacked by a fighter, they will automatically fight on their side and will continue to do so until KO'd.

They will attack with aerial somersault kicks and a move similar to Incineroar's Cross Chop, as well as have an infinite amount of mid-air jumps. Just like any fighter or certain Assist Trophies, they can be attacked and/or grabbed and will accumulate damage. Much like in the original games, when KO'd a tombstone will pop up next to the house and another Flying Man will appear seconds later; also just like the games, only five Flying Men will appear, and once all five have been defeated, no more will show up for the remainder of the match.

Flying Men will not appear during Ness's unlocking battle or during All-Star Mode.

During a Smash Tour session, a Flying Man can appear to trigger a random event. If a player crosses paths with one on the board, he will immediately start following them and will knock away another player if they bump into one.

A costume for the Mii Brawler modelled after a Flying Man was made available as a part of the Wave 3 batch of DLC costumes.

The Flying Men are a team of five birdmen. Each time a Flying Man appears, he'll help the first person to reach him with Flying Cross Chops and Somersault Kicks. A small memorial stone will be erected for each one defeated. Once all five are gone, they're done fighting forever until the next battle.

The Flying Men from EarthBound are five kind brothers with a cruel fate. They live together in a house on the outskirts of Magicant. The brothers gladly join Ness on his journey, but if they fall in battle, they return home to be buried. In Smash Tour, they'll ally themselves with the first player to touch them.

As the Magicant stage returned for the game, they resume their role as a Stage Hazard. The Mii Fighter Costume modelled after a Flying Man also returns, this time as part of the base game and can be purchased from the in-game Shop; the Hat is available for 450G and the Outfit is 600G.

A Flying Man in Ultimate 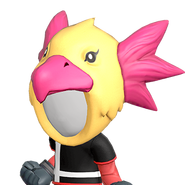