Fly Guys (プロペラヘイホー Puropera Heihō) are a subspecies of Shy Guy from the Mario series There most noticable appearance is in the Yoshi series, erroneously called 'Shy Guys' in the Super Smash Bros. series. Most wear propellers over their heads to enable flight, while others are named differently, and use items like balloons or insect wings.

In Super Smash Bros., they flew back and forth in the background of the Yoshi's Island stage, sometimes with a fruit.

They got a more noteworthy appearance in Super Smash Bros. Melee. They appeared in their original Yoshi's Story sprites as enemies on the Yoshi's Story stage carrying food and were even featured on the Shy Guy trophy. The Fly Guys can be hit or perhaps knocked out with an attack. Doing this will make them drop whatever type of food they are holding. The stage Yoshi's Island from Super Smash Bros. was also converted into Melee and renamed Past Stage: Yoshi's Island, still included with the Fly Guys in the background.

In Super Smash Bros. Brawl Fly Guys reappear as background characters in their Yoshi's Island design on the Yoshi's Island stage. Like in Melee, they were able to be hit with attacks and knocked out, dropping any food they may be carrying.

This enemy from the Yoshi's Island series is basically a Shy Guy with a propeller on its head. It hauls items with it as it flies, so chase it down to claim a reward. Usually it's just food, but sometimes one will have some better prizes. You could say these ones are...pretty fly for a Shy Guy. No? Never mind. 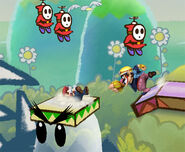 Fly Guys in Super Smash Bros. Brawl. Note the changes; these are a more accurate portrayal of Fly Guys.