Flame Choke replaces Gerudo Dragon as Ganondorf's Side Special Move in Super Smash Bros. Brawl. When used, Ganondorf charges at his opponent, similarly to Gerudo Dragon, but he grabs the opponent by the neck and attacks them with a dark pulse, before slamming them into the ground.

Once he makes the grab, he cannot be knocked out of it (he has super armor while he has an opponent in his grip. This allows Ganondorf to, for example, snag a passing Wario off his motorcycle). It can be quickly followed up by a quick attack, such as Standard A and Down Tilt. Being a grab move, this move works through shields and counters.

When the move is used in midair, both Ganondorf and the grabbed foe are launched directly towards to the ground, which can cause Ganoncide. If Ganondorf performs this move in the air while going through a soft platform (half body above platform and half below) then he will grab the opponent also performing a Ganoncide. However, he has no knockback resistance in the air. This makes it difficult to chase him off the edge, because as a last resort, he takes the opponent down with him, which can be beneficial particularly if Ganondorf is a stock/point up. Also, when Ganondorf does the move in the air, he can slightly alter it's path, slamming the foe more to the left, or more to the right. It can be reversed by quickly tapping the control stick in the opposite direction.

If this is used while on the ground with the opponent near the edge of the stage, it can "Meteor Smash" the opponent straight down off of the edge, However, this is not very useful, as it has set knockback and is too weak to prevent most characters from recovering. They will also grab the ledge if possible.

Unlike Captain Falcon's Raptor Boost, this move does not cause Ganondorf to trip and fall if he misses on the ground. It does, however, still put him into a helpless state if he uses it in the air. If Ganondorf is too close to an edge when he uses the move on the ground, he will instantly go into a helpless state and fall, the same as Captain Falcon's Raptor Boost. However, unlike Captain Falcon, Ganondorf has a chance to move towards the ledge and grab it (if it can be grabbed) before he falls to his death. 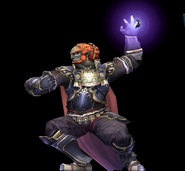 Link falls out of the choke at the move's conclusion.

When used in the air, Flame Choke slams the opponent into the ground.
Add a photo to this gallery
Retrieved from "https://supersmashbros.fandom.com/wiki/Flame_Choke?oldid=380767"
Community content is available under CC-BY-SA unless otherwise noted.