Fireballs are small projectiles launched by Mario and Luigi as their Standard Special Moves. Each travels a short distance, causing minor damage and flinching common to fire-based attacks. The ball's trajectory changes according to the stage's surface angle upon contact, though with different results for each character. Mario's ability to shoot fireballs provides the design justification for his other fire-based moves in the Super Smash Bros. series.

Mario's Red Fireballs fall to the ground, losing momentum with each bounce. As such, they are more effective when fired from higher locations and toward downward slopes, traveling further. When firing at a wall or upward slope, the balls will bounce backward, a more defensive maneuver for brief protection from oncoming foes, perhaps in the air or from behind. Mario's Fireballs can be spammed, though with some difficulty, being fired at a slower rate of fire than Luigi's, but they are a decent approach tactic. The move can be more efficient when used in the air, falling to meet the enemy at ground level, while still moving, and negating lag. 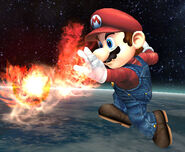 Kirby and Mario using Fireball in Brawl.
Add a photo to this gallery

Luigi's Green Fireballs travel in a straight line and are unaffected by gravity, matching his floaty motif, and drift around in a circle, rather than rolling, like Mario's. Also, despite the fact Luigi's fireballs are green, they still make red-orange burn animations upon impact. They can be easily spammed, and can be fired at a slightly faster pace than Mario's, especially in the Negative Zone, Luigi's Final Smash. When firing at stage elements, the projectile's path will change based on the contact angle. As such, the move is more useful when used toward upward slopes, continuing on to foes. The move is more difficult to use on downward slopes, passing over enemies. Fireball approach is perhaps more difficult than with Mario, as the attack does not fall when used in the air. In general, Luigi's Fireballs are contextually less useful than Mario's, as they only travel in only one direction, where Mario's move in two. They also travel less distance, but deal slightly more damage than Mario's.

Luigi's Fireball attack in Brawl
Add a photo to this gallery

The act of shooting fireballs originated in the 1985 NES game, Super Mario Bros., where the ability was obtained after collecting a Fire Flower. The power is lost when the player dies or takes damage, but can be gained again after getting another Fire Flower. In the game, fireballs were small, traveled very quickly, and did not stop until hitting something, being able to defeat most standard enemies on contact. In this, and other traditional Mario games, Luigi's fireballs are not unique, being red in color and behaving exactly like Mario's.

A Fire Flower would also change the character's clothing colors; Mario's overalls became red, while Luigi's turned green, both with white shirts and cap. These color schemes are available as alternate costumes for Mario and Luigi in Super Smash Bros. Brawl.

Coincidentally, the physics of the Green Fireball in Mario Bros. matches with that of Luigi's in the Super Smash Bros. series.

This video shows some techniques for the use of Mario's Fireballs.

Retrieved from "https://supersmashbros.fandom.com/wiki/Fireball?oldid=387711"
Community content is available under CC-BY-SA unless otherwise noted.