The Fire Fox is Fox's Up Special Move in the Super Smash Bros. series. It involves Fox charging the move, and then going in the direction inputted on the control stick. The move has a Fire element throughout its entire duration. Falco and Wolf have similar moves being named Fire Bird and Fire Wolf, respectively, though Wolf's version has no fire.

This move is Fox's primary recovery move, and is used mostly for vertical recovery, with Fox Illusion being used for horizontal recovery, though it is also good horizontally if it isn't expected to be used. There are 180 different angles the attack can be used in. When used in midair, Fox remains stationary during the charging. The attack can deal around 28% damage, provided the opponent is hit by both the charge-up and recovery. Fire Fox covers the most distance out of all three of the Star Fox Up specials. Fire Fox only hits opponents once, not including any charge-up hits. It is highly likely to return to the ledge of the stage by using Fire Fox to recover, due to its long traveling distance.

In Super Smash Bros., Fire Fox was notably different from Super Smash Bros. Melee and Super Smash Bros. Brawl; instead of being surrounded by fire, Fox charged the move without flame, was pulled down by gravity at a reduced rate, and then propelled himself with an explosion, similar to PK Thunder. The charging did not inflict damage. 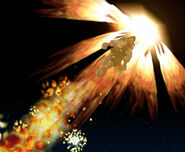 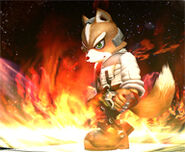 Fire Fox in Super Smash Bros. for Wii U
Add a photo to this gallery

Flying Fox is one of Fox's Up Special Moves that can be used through customization. The move sends Fox high into the air at high speed, but deals no damage.

Twisting Fox is one of Fox's Up Special Moves that can be used through customization. Fox spins to pull opponents in, then rises into the air, hitting multiple times on the way. This is similar to Fire Wolf.

Fox using Twisting Fox.
Add a photo to this gallery

Fire Bird is Falco's Up Special Move in both Super Smash Bros. Melee and Super Smash Bros. Brawl. Like Fox, Falco charges the move, then fires himself in a direction. While almost identical to Fire Fox, it has some small differences.

In Melee, Fire Bird, like Falco's other Special Moves, resembles the original version of one of Fox's Special Moves, this one resembling Fire Fox: It has high KO power, making it one of his finishers. Its distance is also shorter, being slightly less than half of Fire Fox's current distance. Also, it doesn't burn opponents during the charge-up animation.

In Brawl, Fire Bird does 14% damage, and has low priority. However, it has some more differences: unlike Fire Fox, which only hits an opponent once after Fox starts moving, Fire Bird now hits opponents with multiple small hits followed by a stronger finishing blow, similar to Lucas' PK Thunder, having horizontal knockback instead of vertical. It also gained the ability to burn opponents during the charge-up.

In either version, it has lots of start-up, and falls almost straight down after using it, which means being easily edgehogged or hit out of it because of its low priority. To maximize the usefulness of Fire Bird, one should try to position Falco exactly under the ledge and use it completely vertical; this way, it can sweetspot easier. However, it is still easily edgehogged, due to the poor air speed after using it, similar to Fire Wolf.

Fire Bird in Super Smash Bros. for Wii U.

Falco's Fire Bird charging in Super Smash Bros. for Wii U.
Add a photo to this gallery

Distant Fire Bird is one of Falco's Up Special Moves that can be used via customization. Falco takes longer to charge, but he flies farther and hits enemies harder.

Fire Wolf (Japanese: Wolf Shoot - ウルフシュート, Urufu Shutto) is Wolf's Up Special Move in Super Smash Bros. Brawl. "Wind" gathers about Wolf, and then he is fired in a straight line. Fire Wolf is similar to Fox and Falco's Fire Fox and Fire Bird, but has a few differences.

Its appearance is unique in that it produces no fire, and will not burn opponents who make contact with it. Its animation also differs; Wolf thrusts his legs forward and extends a foot, as opposed to traveling headfirst. It has much less charging time than its counterparts, but will not affect opponents during this time. Once Wolf begins moving, it will drag opponents who are caught within its range, hitting them multiple times and dealing up to 11% damage. Wolf kicks as the move finishes, delivering substantial knockback and dealing an extra 3% damage.

Despite its multi hit property, some characters who are caught in Fire Wolf may intercept it if they possess a fast enough attack, such as Marth's Dolphin Slash. Fire Wolf may be used to travel in sixteen distinct directions, and carries Wolf approximately half the distance of Final Destination, further than Fire Bird and almost as far as Fire Fox. However, its ledge sweetspot is very small, which can cause difficulty when the move is used to recover.

Retrieved from "https://supersmashbros.fandom.com/wiki/Fire_Fox?oldid=596897"
Community content is available under CC-BY-SA unless otherwise noted.