Fire Breath (クッパブレス, Kuppaburesu. Koopa Breath) is Bowser's Neutral Special Move in Super Smash Bros. Melee, Super Smash Bros. Brawl, and Super Smash Bros. for Nintendo 3DS and Wii U. Bowser continuously exhales a stream of fire in front of him, which gradually decreases in length over time. Bowser Jr. and all the Koopalings have the move fire breath, but it can not damage opponents, they use Fire Breath in their up taunt. 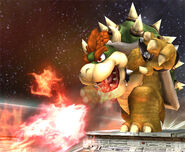 The Fire Shot is a move that increases the range of the regular Fire Breath by firing out large fireball projectiles at a steady rate when the button is held. The move is optimal for zoning an opponent since it can easily be spammed by holding down the button, though opponents that manage to break through the barrage of fireballs can easily punish Bowser because the move has higher ending lag than the ordinary Fire Breath. It also starts up slower and has a slower rate of fire since it is not a continuous stream of fire, but makes up for this with the increased size of the fireballs and the ability to angle the projectile up and down while firing it. Angling it up can easily deal with opponents approaching from the air a greater distance away, but is not as effective at close range. Angling it downwards will have the fireballs go on a downwards path a short distance in front of Bowser and then ricochet off of the platform in front of him and go upwards, which can be an effective method since the close range fireballs will deter any nearby opponents and the farther away projectiles can deal with aerial enemies. The move can easily rack up damage quickly and because of the projectile size they can be difficult to dodge; the move is also excellent for shield pressure. The power of the move will not decrease as it is used, making it even better for zoning or spamming.

The Fire Roar trades at range and power for small window of use. It quickly runs out of power and takes a while to regain this power. At full power it has great range and attack power and this range can be used for edge-guarding. When it has run low on power it has abysmally poor range and attack power but can still be used for edge-guarding. Using the move on the edge of the stage can knock recovering opponents a short distance back so that Bowser can knock them away even farther with an aerial attack.