Fire is Mr. Game & Watch's Up Special Move. Mr. Game & Watch uses this as his Recovery. When used, two firefighters holding a fire rug will pop out, allowing him to jump higher. 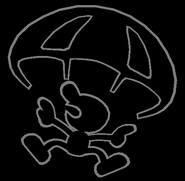 Heavy Trampoline is one of Mr. Game & Watch's Up Special Moves that can be used via customizations. Mr. Game & Watch will not go very high, but the move gives more damage. In the start of the move, there is a sweet spot. The sweetspot does higher, more diagonal knockback than the default version.

Heavy Trampoline is an excellent move for dealing some good damage on an opponent and securing kills. The trampoline hitbox launches opponents diagonally upwards, while the parachute opening hitbox launches vertically. The move combos out of down throw at lower percentages and into most of Game and Watch's aerials. Heavy Trampoline KOs at around 120% on most characters. Unfortunately, it does sacrifice recovery for this damage and KO power. It covers severely less vertical distance and has less horizontal influence as Mr. Game and Watch is launched upwards by the move.

Trampoline Launch is one of Mr. Game & Watch's Up Special Moves that can be used via customizations. Mr. Game & Watch can't use the parachute, similar to the Fire in Melee, but he will not be in a helpless state. In the fall, it's possible to perform air attacks quicker than the default, making it useful for combos, it also has a lot of knockback on startup.

Trampoline Launch is for players that want a greater recovery from Mr. Game and Watch. The move launches him much higher and with a good amount of speed as well. However, it deals less damage to opponents it hits and the parachute doesn't open at the end. For this reason, Mr. Game and Watch has less horizontal influence over his descent and less options for landing.