Final Cutter (ファイナルカッター) is Kirby's Up Special Move. Kirby draws a silver blade, similar to a scimitar, jumps into the air a bit less than the height of Falco's full jump, and falls quickly, releasing a blue "wave" projectile forward if he lands on a solid surface, travelling the distance of a Falco Phantasm. This attack is somewhat similar to Ike's Aether & Chrom's Soaring Slash.

Generally hits best on the way up, and at the very end of the attack. Although it lost much power and use in the transition from Super Smash Bros. to Super Smash Bros. Melee, it is still quite useful to skilled players. It should also be noted that the move as a whole can be moved much further horizontally when used on the ground as opposed to in the air. In Super Smash Bros. Brawl, the Final Cutter is stronger than in Melee.

The descent of the move delivers a heavy Meteor Smash, which is easier to use over a pit. This can develop into a technique known as Cuttercide/Kutterkaze. When the opponent is trying to recover, Final Cutter can be used to intercept them and spike them downward, killing both the player and (most of the time) the opponent as well (beware that the player using Cuttercide passes the blast line first.)

This move is also useful against edge guarding if used high in the air at the top corners of stages, such as Final Destination or Battlefield. If Kirby performed the move at a good enough distance and an edge guarder was in the air coming for it, Kirby could potentially catch the opponent on the sword's descent, sending them towards the lower blast line and finding itself grabbing the edge.

Unlike most other recovery moves, Final Cutter does not throw Kirby into helplessness; when the ascent is finished, Kirby falls quickly and retains the hitbox. However, if Kirby lands at the edge of a platform and is pushed off by wind, conveyor belts, Mario's F.L.U.D.D. or Squirtle's Water Gun while he is still in his ground-slam animation, Kirby will quickly slide off into his helpless form. 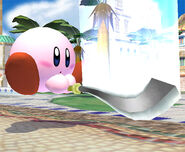 Final Cutter being used on Mario.

In Super Smash Bros. for Nintendo 3DS and Wii U, with the introduction of Custom Moves, Kirby has 2 variations of Final Cutter.

Wave Cutter (アースウェーブ) is Kirby's Up Special Move that can be used via customization. This move launches opponents farther than the default Final Cutter, and when Kirby arrives in solid ground, rocks are generated.

The Wave Cutter does not deal damage with the sword but the wave sent out is more powerful in terms of range and launch. Since it launches opponents into the air it can set up for some aerial combos and the increased range can launch recovering opponents away from the stage. Unfortunately the move itself is not very useful in the air as an attack since the wave will only damage opponents on the ground and the move has lost its meteor effect.

Upper Cutter (ライジングカッター) is Kirby's Up Special Move that can be used via customization. Kirby can only do the upward slash.

For a custom variation with greater vertical recovery, there is the Upper Cutter. It can also be influenced more horizontally during descent, though on the way down Kirby is left in a helpless state. However, because the move does not plummet downwards with the second attack, Kirby cannot SD with it when used off-stage. The move is also faster in execution and a great combo finisher and kill move; using this as an out of shield option or on opponents that are standing on platforms above Kirby can result in a kill; the move can also get kill confirms out of up tilt and up aerial.

Debuted as a special move seen in Kirby Super Star, if Kirby had the Cutter ability and was close enough to the enemy while attacking, the normally ranged Cutter technique would become a rapid slashing combo attack, ending in the Final Cutter. The "Final Cutter" move has more recently been used by Kirby's Sword ability in games such as Kirby and the Amazing Mirror. In Kirby and the Amazing Mirror and Kirby: Squeak Squad, coincidentally, the input for that move is up then B.

Kirby could also use this move, along with other Smash-techniques by acquiring the Smash ability in Kirby and the Amazing Mirror.