Wire Frames are, true to their name, a framework of pink lines in a humanoid shape. Their faces are comprised of the Super Smash Bros. logo, and a red heart-like object can be found within their chests. Wire Frames come in male and female varieties, modeled after Captain Falcon (and by association, his clone Ganondorf) and Zelda, whose standard attacks they borrow.

Wire Frames are unable to use B attacks, and thus are limited in their recoveries. To compensate their lack of recoveries, Wire Frames are fought in a lower-gravity setting. Wire Frames are also unable to charge smashes and some of their moves are much weaker versions of Captain Falcon's and Zelda's attacks. Two obvious examples are the knee, which does not have the power or electricity in the Wire Frame version, and Zelda's lightning kicks, which also lack electricity. Oddly enough, the Male Wire Frame throws more like Ganondorf, and thus, is very good at chainthrowing.

Wire Frames appear in all modes of Multi-Man Melee, in Battlefield during Adventure mode, and in Event 37: Legendary Pokémon. Generally, they are weak and light fighters. Male Wire Frames are slightly more aggressive than Female Wire Frames; males always home towards the player's character, whereas the females throw attacks more or less randomly. All Wire Frames have a weakness to fiery attacks.

In Cruel Melee, however, all Wire Frames are extremely aggressive, and are also handicapped to be extremely powerful and harder to knock off-stage. Characters cannot survive easily among the Wire Frames because of their amplified power and aggressive edge-guarding.

An April Fools Joke said you could unlock Tails and Sonic by defeating 20 Wire Frames in Cruel Melee. The joke was started by EGM, not unlike the infamous Sheng Long joke for Street Fighter 2. While it since has been proven and admitted to be false, some people still believe the joke.

Wire Frames are considered to be successors to the Fighting Polygon Team and the predecessors of the Fighting Alloy Team, although they have a far larger role than them.

Who built the Fighting Wire Frames and to what purpose remains a mystery. They're a simple collection of wires which house a sparse framework of bones and organs that lends them a rather disturbing appearance. They look rather big and powerful, but in reality, both their offensive and defensive abilities are subpar.

This is the female model of the Fighting Wire Frames. The female's abilities are roughly the same as the male model's. All Fighting Wire Frames lack the ability to use special techniques, and their attacks lack any real physical strength. Additionally, they're slow and are therefore easy to outmaneuver. They tend to attack in gangs.

The Multi-Man Melee mode consists of 10-Man, 3-Minute, Endless, and other such matches, which pit you against the Fighting Wire Frames under varied rules. Of particular note is the Cruel Melee, where the Wire Frames pull no punches; they'll come after you with a single-minded fury rarely seen in CPU opponents. 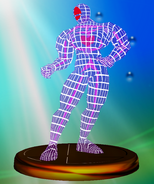