Captain Falcon draws back his right hand before stepping forward while punching, shouting "Falcon...PUNCH!" and dealing moderate knockback and 24-27% damage. Over the course of the series, Falcon Punch has undergone many aesthetic changes, with the majority being in Brawl and SSBWU/3DS due to animation improvements to incorporate an exaggerated pose and realistic fiery effects.

In Super Smash Bros. Brawl, Captain Falcon can perform a Reverse Falcon Punch by tilting the control stick in the opposite direction immediately after initiating Falcon Punch.

In The Subspace Emissary, Captain Falcon uses the Falcon Punch against a giant R.O.B. in his first appearance, though it resembles the move from F-Zero: GP Legend.

Falcon Punch has the reputation of being one of Captain Falcon's most powerful finishers, and one of the most powerful Neutral Special Moves in the entire series. This is primarily due to its large hitbox, high knockback and damage, and ability to integrate into combos, making it a potent KO option as low as 60%. However, it also has considerable startup, making it easy to punish if shielded or missed. 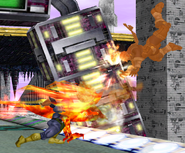 Falcon Punch in The Subspace Emissary.

Falcon Dash Punch is one of Captain Falcon's neutral special moves that can used via customization. Captain Falcon will rush forward, allowing him to hit people from a long distance, but the punch will be weakened significantly.

While the move is unique to the Super Smash Bros. series, Captain Falcon famously performed a Falcon Punch in the F-Zero animated series, F-Zero: GP Legend, where he uses it to defeat Black Shadow. It has become quite memetic, as the clip makes it appear that the Falcon Punch causes an explosion that can be seen from space, when in reality, the blast is from Black Shadow's self-destructing base, and Captain Falcon is merely using the Falcon Punch to prevent Black Shadow from escaping said explosion. This is reinforced in a Subspace Emissary cutscene, when Captain Falcon performs a Falcon Punch on a giant R.O.B. in a very similar fashion to the clip from the animated series. It is possible that the firey explosion could be a reference to the explosions when crashing into cars in "F-Zero," though this has yet to be proven.

As a testament to the move's popularity, it seems to have come full circle and crossed back over into F-Zero canon: it is mentioned in F-Zero GX's ending song, specifically in the line "When a mighty illusion threatens your lunch, Falcon will be unleashing the Falcon Punch."

The Falcon Punch in Super Smash Bros. is more likely to become a combo than in Melee and Brawl due to it only having Smash DI, and being much quicker. Common tactics include throws to Falcon Punch and Down/Up Air Attack to Falcon Punch. Falcon Punch is also used by Falcon in this game to help him recover from far away as Falcon Punch causes Falcon to raise slightly vertically and also horizontally.

In Super Smash Bros. Melee, the Falcon Punch was made slower, though the punch itself seems to be stronger, and now has a full 3-D model, complete with better fire effects. Due to C. Falcon's Down Air Attack being much slower than in Super Smash Bros, that combo was made more unreliable, but with L-Canceling, it is still possible. On the other hand, the Sacred Combo was first discovered and is considered its easiest to use in this game.

The punch was made slightly faster than in Melee, though it appears to be weaker along with most of Captain Falcon's moves, and nowhere still as fast as the original counterpart. But thanks to the inclusion of reversing the attack, new tactics are in hand.

Double-jump facing away from the opponent and right before he falls, Reverse Falcon Punch. Captain Falcon can then tilt the motion towards the opponent to reduce the time it takes to charge on the ground, strengthen the punch by reversing it, and use the attack just as he hits the ground. Best to use it on off-guard opponents that are expecting the player to flee.

The above method can also be applied when Captain Falcon hangs on an edge, albeit much more dangerous because of the likelihood of an SD. When he hangs from the edge, the other brawler must jump, tilt away from the edge (this will not visibly make Captain Falcon turn, but he is likely to be turned around in the game's registering), reversing Falcon Punch. When done at the tip of the edge jump, the punch is thrown a little bit off the ground, so if one wants the punch to activate on the ground, then he must start the Reverse Falcon Punch a little after the tip of the jump. Captain Falcon must make sure he faces away when performing the reverse, and also making sure one has stopped tilting away from the edge when starting the Reverse Falcon Punch. This method is slightly more difficult when done incorrectly than the normal "RAR'd" Falcon Punch, but it can catch potential edgeguarders off guard.

Despite the slowness of Falcon Punch, there are a few situations where a launcher (namely, Down Air Attack) can combo into Falcon Punch.

Named after Tapion, this two-hit combo leads into Falcon Punch after an l-canceled down aerial. It works on Fox as low as 75% damage, Falco as low as 78%, and C. Falcon as low as 80%. It can be avoided with Directional Influence.

Named after G-Regulate, this combo works similarly to the Tapion Punch Combo, but uses a platform. Captain Falcon must l-cancel a down aerial onto a platform so that it hits an enemy below him. Against some characters at some damages (notably Marth at 65%), Falcon can combo his down air attack into Falcon Punch. It can be avoided with Directional Influence.

The combo itself is performed by knocking an opponent off the stage with Captain Falcon's forward air attack (the Knee Smash) and then jumping off the edge of the stage before striking the opponent with Captain Falcon's Standard Special, the Falcon Punch, in mid-air. If performed successfully, this combo results in a KO in almost all cases, although by performing this combo, Captain Falcon may fail to recover back to the stage in Melee if he jumps too far off the edge to perform his Falcon Punch. In either cases, KOing an opponent with the Sacred Combo is widely regarded as being one of the most satisfying ways to remove an opponent's stock.