Falcon Dive is Captain Falcon's Up Special Move. Contrary to the name, Falcon does a leap in the air, fist extended while glowing. If Captain Falcon catches the opponent while still ascending, he'll grab the foe and launch them off with an explosion while doing a cry of "Yes!". If a hit is scored, the attack can be used again. When used on the ground or in the air, it can be reversed. Falcon Dive can be used to stage spike opponents.

In Super Smash Bros., this move was Falcon's main recovery move, other than the Falcon Punch angled upwards. However, it was extremely easy to edgehog due to the fact that it could not grab foes hanging onto a ledge, thus making recovering with Falcon in some cases near impossible.

When the move connects with foes, it will strongly launch them at a 45° angle horizontally and vertically, thus making it hard to DI the knockback. It does a solid 20% damage upon connection with high knockback (average kill is around 130%). As with all of Falcon's Special Moves, it had 2-D rendered sprites as special effects. When contact is successful, it will restore a foe's midair jump and Falcon will be not be helpless, free to use the move again.

In Super Smash Bros. Melee, not much has changed, aside from a better voice quality and better special effects. Falcon Dive seems somewhat weaker, but landing the move appears to be easier, as various combos can lead into this move, usually a Raptor Boost. The move gains more horizontal and more vertical distance. Like before, contact will allow the foe to reuse a midair jump and give Captain Falcon the ability to use the move once more. However, a Falcon Kick will restore Falcon's midair jump, so it is advised to use it and the Dive to safely return to the stage.

In Super Smash Bros. Brawl, Falcon Dive was buffed. Timing and landing the move seems to be improved due to the floatiness and the slower falling speed. However, doing it in the opposite direction Falcon is looking drastically decreases the horizontal distance. Also, Captain Falcon is vulnerable to hits during the start-up and to moves that hit directly above him (where the move has no grab hitbox).

It no longer restores a foe's midair jump, though Falcon can still use the move afterwards. This move cannot break Smash Balls, but it is capable of destroying targets in Target Smash!! when the body comes in contact with the target. Perhaps the biggest change is the ability to finally grab foes that hang on the ledge; Falcon Dive will grab foes hanging onto the ledge and function as it normally would airborne, making Captain Falcon harder to edgehog than ever before, though it is still vulnerable if the edgehog is timed early enough, especially because his ledge sweetspot range is one of the largest in the game. It is excellent at punishing foes who camp on ledges. 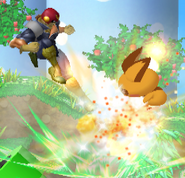 Falcon ascending in the move in Super Smash Bros. Brawl.

Falcon Dive can be customized to become Falcon Strike in Super Smash Bros. 3DS/Wii U. Captain Falcon, now with a blue hue, can leap an extraordinary distance. However, he cannot grab opponents while using this move.