Green (with one iris larger than the other)

Falco Lombardi (ファルコ・ランバルディ, Faruko Ranbarudi?) is one of the main characters of the Star Fox series. He is a member of Star Fox, and has been with Fox and crew since their debut on the SNES. He is considered the finest pilot of the group, and is well known for his arrogant personality.

Falco Lombardi was first introduced in the SNES game, Star Fox, as the best pilot of Fox's three wingmates. In later games, he is further detailed as being brash and egotistical, as well as suggested to have formerly been a gang member. Falco returns in the game's remake, Star Fox 64.

In 2002's Star Fox Adventures, Falco is notably missing for nearly the entire game. This is simply due to the fact that he was not able to be properly worked into the plot when Nintendo told Rare to put the Star Fox label on the game. A manga entitled Star Fox: Farewell, Beloved Falco came with the Japanese edition that takes place during the eight-year gap between Star Fox 64 and Adventures. The comic explains Falco's absence, and directly leads up to the events of Adventures. Near the end of the game, Falco aids Fox during the final boss fight and shortly appears again to join the other main characters in the ending cutscene.

Star Fox: Assault sees a more tame Falco as part of the core team again under the title of "Ace Pilot". Every one of the story mode's missions has Falco in his Arwing, as he never joins Fox on foot like Slippy and Krystal. In Star Fox Command, Falco has again isolated himself from the rest of the characters, though he is still considered to be a member of Star Fox. Falco, like all, pilots a customized vehicle, his own being the Sky Claw, a slim Arwing-like fighter with forward-swept wings armed with a single laser and a multi-lock. 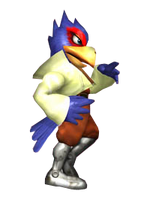 Falco appears in Super Smash Bros. Melee as part of the unlockable roster of characters. He is based on his appearance in Star Fox 64. He is known to possess the highest jump of all other combatants. His moveset is derived directly from that of Fox's, leading some to classify him as being a "clone." His play style is said to be very similar to Fox's in Super Smash Bros.; indeed, Falco does appear to be a recreation of the "old" Fox. His Blaster retains the attributes of Fox's in the original game; rather than having rapid-fire capabilities (as Fox's new Blaster does), Falco's Blaster fires at a much slower rate. However, it has the ability to cause opponents to flinch, unlike Fox's. He is ranked 2nd on the tier list, due to his excellent technical ability. 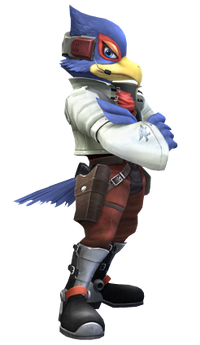 His appearance in Brawl is a mix between his design in Star Fox Assault and Star Fox Command. Falco is acquired by playing 50 brawls, meeting him in the Subspace Emissary, or by completing the 100-Man Brawl in the Stadium mode on Solo. Falco's special moves are similar to those of Fox's and Wolf's. However, his recovery move, the Fire Bird, is shorter, but the Falco Phantasm is slightly longer than Fox's, which is also stronger than Fox's and weaker than Wolf's. His Blaster cannot fire rapidly like Fox's, but is faster and quicker than Wolf's. And perhaps the biggest difference in these is the fact that his Reflector is not constant anymore. Instead, Falco kicks it from him and it is released for a second or two instead of being continuous. His side smash now is him clamping his arms over another character instead of a kick. His aerials are different too. His forward air is similar to Pikachu's, and his neutral air is him doing a 360 degree spin and slashing with his arms. His Final Smash, though it differs in functionality, is virtually the same as Fox's and Wolf's.

A Team Star Fox pilot whose real name is Falco Lombardi. He once roamed the starways as the head of a galactic gang, and his piloting skills are superb. He affects an air of cool disdain and is sometimes uncooperative, but in reality his passion for the Star Fox team is second to none. He once left the team to fly solo for a time.

A somewhat arrogant and smart-mouthed member of Team Star Fox. He often seems perturbed, especially when antagonized by Panther, and claims to dislike the cold. Although separated from the team, he joins back up for the battle on Sauria and pretends that the reason behind his loyalty to the team is purely monetary.

Tired of the daily grind and monotony of work after the events of Star Fox: Assault, Falco seeks more stimulating adventures with his buddies from his days as a space delinquent. He meets up again with Fox, who is battling a new enemy, the Anglar, on the planet Venom. Falco again vows to fight alongside Fox as a member of the Star Fox team. 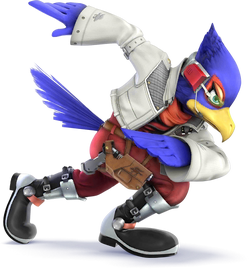 Falco returns the upcoming game for 3DS and Wii U.

Retrieved from "https://supersmashbros.fandom.com/wiki/Falco_Lombardi?oldid=474329"
Community content is available under CC-BY-SA unless otherwise noted.