Falco Lombardi (ファルコ・ランバルディ, Faruko Ranbarudi?) is one of the main characters of the Star Fox series. He is a member of Star Fox, and has been with Fox and crew since their debut on the first Star Fox game for the SNES. He is considered the finest pilot of the group, and is well known for his arrogant personality.

Falco Lombardi was first introduced in the SNES game, Star Fox, as the best pilot of Fox's three wing mates. In later games, he is further detailed as being brash and egotistical, as well as suggested to have formerly been a gang member. Falco returns in the game's remake, Star Fox 64.

In 2002's Star Fox Adventures, Falco is notably missing for nearly the entire game. This is simply due to the fact that he was not able to be properly worked into the plot when Nintendo told Rare to put the Star Fox label on the game. A manga entitled Star Fox: Farewell, Beloved Falco came with the Japanese edition that takes place during the eight-year gap between Star Fox 64 and Adventures. The comic explains Falco's absence, and directly leads up to the events of Adventures. Near the end of the game, Falco aids Fox during the final boss fight and shortly appears again to join the other main characters in the ending cutscene.

Star Fox: Assault sees a calmer Falco as part of the core team again under the title of "Ace Pilot". Every one of the story mode's missions has Falco in his Arwing, as he never joins Fox on foot like Slippy and Krystal. In Star Fox Command, Falco has again isolated himself from the rest of the characters, though he is still considered to be a member of Star Fox. Falco, like all, pilots a customized vehicle, his own being the Sky Claw, a slim Arwing-like fighter with forward-swept wings armed with a single laser and a multi-lock.

Falco has a cocky attitude and is often uncooperative, frequently chastising his crewmates. He criticizes his leader Fox the most, due to his general disdain for authority and his secret want to be the leader himself. However, he does have a strong sense of loyalty and will always be there to help his friends, albeit at the last minute so he can take the credit. Falco Leaves and rejoins with team Star Fox multiple times throughout the franchise depending on his goals and the actions of the player in the case of Command. Falco is often compared to Han Solo of the Star Wars franchise, including the Nintendo Power Official Player's Guide for Assault.

Falco appears in Super Smash Bros. Melee as one of the eleven unlockable characters, being a clone of Fox. His design for this game is based on his appearance in Star Fox 64.

His play style is said to be a clone to Fox's in Super Smash Bros.; indeed, Falco does appear to be a recreation of the "old" Fox. His Blaster retains the attributes of Fox's in the original game; rather than having rapid-fire capabilities (as Fox's new Blaster does), Falco's Blaster fires at a much slower rate. However, it has the ability to cause opponents to flinch, unlike Fox's. He couples his trademark projectile with strong mobility, attacks with fast frame data, and excellent comboing capabilities, though his frailty and susceptibility to getting comboed required Falco players to tread carefully when using him. But like Fox, he also ranks high, currently ranked 2nd on the tier list only behind Fox.

Falco Lombardi
A Star Fox team pilot, Falco's constant air of casual indifference belies his precise piloting skills. He avoids discussion of what he did before joining the team, but many consider it likely that his past was filled with reckless behavior. He's not much for cooperation, but he does respect those more skilled than he is.

Falco Lombardi [Smash]
Where his leader, Fox, has blinding speed, Falco has his own distinct skills and advantages. He has both a higher jump and a longer reach than Fox, and although his Blaster lacks rapid-fire capabilities, it strikes with shocking force. Unlike Fox, Falco can stop enemies in their tracks with his Blaster fire.

Falco Lombardi [Smash]
Falco's amazing jumping abilities have many merits, but it's vital to realize that it comes at the cost of some attack power and defensive strength. He falls at a high speed, which disrupts potential attackers, but this also prevents successful recoveries occasionally. Hit an opponent with Reflector, and he or she will fly straight up; this is Falco's quickest attack. 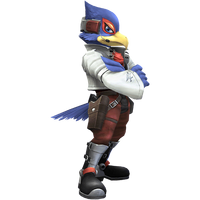 Falco returns as an unlockable character in Super Smash Bros. Brawl, with his appearance being a mix between his design in Star Fox Assault and Star Fox Command, and is voiced by Dex Manley. Falco is acquired by playing 50 brawls, meeting him in the Subspace Emissary, or by completing the 100-Man Brawl in the Stadium mode on Solo.

Falco still has the same Special Moves as Fox, but have been changed to make them more personalized, and is now a semi-clone of Fox: Blaster (colored blue) causing flinching and electrical damage, Falco Phantasm going over a longer distance and spiking opponents, Fire Bird having a shorter distance, and Reflector being kicked to attack foes while reflecting projectiles. His forward air is similar to Pikachu's, and his neutral air is him doing a 360 degree spin and slashing with his arms. Out of the three Star Fox representatives, Falco is more reliant on speed and mobility, and his Final Smash Landmaster reflects this.

Despite these changes (or perhaps because of them), Falco has still maintained his position as a top-tier, clocking at 7th, the highest Star Fox representative in Brawl, whereas Fox and Wolf are mid-tier.

Falco
A Team Star Fox pilot whose real name is Falco Lombardi. He once roamed the starways as the head of a galactic gang, and his piloting skills are superb. He affects an air of cool disdain and is sometimes uncooperative, but in reality his passion for the Star Fox team is second to none. He once left the team to fly solo for a time.

Falco (Assault)
A somewhat arrogant and smart-mouthed member of Team Star Fox. He often seems perturbed, especially when antagonized by Panther, and claims to dislike the cold. Although separated from the team, he joins back up for the battle on Sauria and pretends that the reason behind his loyalty to the team is purely monetary.

Falco (Command)
Tired of the daily grind and monotony of work after the events of Star Fox: Assault, Falco seeks more stimulating adventures with his buddies from his days as a space delinquent. He meets up again with Fox, who is battling a new enemy, the Anglar, on the planet Venom. Falco again vows to fight alongside Fox as a member of the Star Fox team. 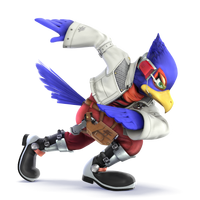 Falco is once again playable as a secret fighter in Super Smash Bros. for Nintendo 3DS and Wii U. While he retains his appearance from Star Fox Command, he is now voiced by Mark Lund, who also voices him in Star Fox 64 3D. Falco retains his same move-set from Brawl, but has been nerfed severely due to changes in his neutral game, overall making Falco a shadow of his former glory, and having the lowest tier drop in the transition from Brawl. Falco is currently ranked 47th out of 55 on the tier list, in the F tier. In a similar fashion to Melee, Falco possesses a combination of high power, fast attack speed and great combo versatility. His recovery has also been buffed, now being among the longest-distanced. However, the nerfs he received were significant enough to make his neutral game one of the weakest in the game. Blaster, formerly a notoriously powerful zoning tool, has been deprived of its high speed and autocancelling capabilities. Down aerial is also much slower, limiting its use in edgeguarding and comboing. Back aerial lasts for a shorter amount of time, removing Falco's most reliable spacing option at close range. Finally, the removal of DACUS prevents his up smash from being used in the Gatling Combo or as a finisher. As a result of his infamously weak approaching capabilities, Falco has low representation and scarce results.

Falco
A talented pilot and part of the Star Fox team, Falco can be a bit rough around the edges. He once led his own galactic gang before joining up with Fox. In Smash Bros., his ability to jump high and deal damage in the air makes him a powerful threat, and his thrown Reflector can catch foes by surprise.

Falco (Alt.)
Falco's Blaster looks identical to Fox's at first, but actually it's quite different! The beams Falco fires deal more damage and cause the victim to flinch, but at a slower rate of fire. Considering Falco's lineage, it's not all that surprising that he can fire faster while airborne.

Falco (Assault)
Falco, the ace pilot on the Star Fox team, and Fox set out to deal with Oikonny's rebel army. However, they were shocked by something completely unexpected! Was it Oikonny's amazing, unmatched fighting prowess? Pfft! As if! They were surprised by a sudden attack by hive-minded alien invaders!
(GCN) Star Fox: Assault (02/2005)

Falco appears as an unlockable character in Super Smash Bros. Ultimate. Like the other Star Fox characters, his design is now based on Star Fox Zero.