This article is about Falco's appearance in Super Smash Bros. Melee. For the character in other contexts, see Falco Lombardi; for information on the character of whom Falco is a clone, see Fox.

Falco (ファルコ, Falco) is a hidden character in Super Smash Bros. Melee. He is considered a clone of Fox, sharing many normal and special attacks, although their playstyles are somewhat different.

Falco currently ranks 2nd in the Melee tier list, making him the highest ranked unlockable character, clone character, and newcomer. Much like Fox, Falco has good speed and power to quickly overwhelm his opponents with a variety of approach options. However, he is a lightweight character with high falling speed and low air speed, making him vulnerable to horizontal KOs.

When being fought, Falco will appear on Battlefield, with the music from Corneria playing. 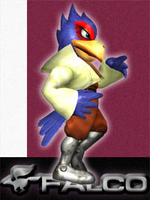 Falco boasts the second fastest normal falling speed and the fastest fast falling speed. This means he resists being juggled and can perform SHFFLs well. On the downside, his recovery is shortened, and he is vulnerable to combos and chaingrabs that work on Fast fallers. However, he can chaingrab floaties.

Falco's excellent short hop makes him very good at combos and short hop lasers. His short hop lasers prevent most characters from approaching safely and can increase pressure on the opponent. His Reflector not only reflects projectiles, but can also be used for combo opportunities like pillaring. Falco also has the highest initial jump, the ability to wall jump, and a very effective Down Aerial spike. Additionally, he possesses the odd quality of having a higher top walking speed than running speed.

Though Falco's recovery covers less distance than Fox's, Falco retains the vast array of angles available when using Up-B (Fire Bird), however, his does not burn enemies during charging like Fox's. The bird's other main recovery tool, Side-B (Phantasm), is again shorter than Fox's, but it initiates quicker, and like his clone's can be shortened to provide further control over ending distance. These characteristics make for a recovery that is rich in options, but limited in distance. Falco's faster falling speeds are a drawback in this area, making him more susceptible to gimps.

Since these characters' offer a wide variety of viable options in movement, neutral game, approaches, shield pressure, recovery, and defense, they can be played in many different ways, making them potentially less predictable. Overall, these characters have some of the most thoroughly exploited movesets overall in the game, with each of their moves used to great effect in competitive play in an assortment of ways. However, the end result of the different physics of Falco and Fox is two vastly different feeling, looking, and functioning characters that both generally perform well throughout Melee's competitive history.

Like some other characters, Falco received minor changes in the PAL version of Melee. Although these changes slightly nerf him, they do not significantly impact his competitive viability.

SHL/B stands for "Short-Hop Laser/Blaster" and is very disruptive to opponents. In order to do a SHL/B, one must short-hop, fast-fall, and shoot a laser. When fast-falling correctly, there is no lag and the player is free to move about while shooting. A player can send flurries of SHL/Bs while approaching an opponent. This can somewhat substitute Falco's average speed dash, as it is a very fast and effective way to move around due to his fast jump and fall. SHL/B is considered to be the best approach tactic in the game and one of the most annoying moves in the game. It is imperative that Falco players learn to SHL/B since it is Falco's main method of opening up opponents' defenses.

A basic combo of Falco players is grabbing the opponent, throwing them down, immediately shining them and chasing them upward for a spike. This can be done several times to build up damage, forcing the opponent near the edge, and spiking them a final time. This combo is a guaranteed kill around 100% or 110%. It works on nearly every character except other Fox and Falco, and on floaters or lightweights (although with C. Falcon it is imperative to SHL or SHFFL the down aerial).

Like Fox, Falco can Down Throw an opponent at the very edge of a stage which can't normally be passed through, and the lasers from the throw send the opponent down extremely quickly. It is almost impossible to Meteor Cancel it or recover from it at any percent, due to the speed. This tactic will only work if Falco is facing inward when he is on the edge.

Along with Fox and Sheik, Falco can use a boost for his grab. To do it, perform a dash attack and right after, press the grab button, and Falco will be able to reach out more when he grabs. It can't be jump cancelled. This can be used to increase grab range.

In addition to the normal trophy about Falco as a character, there are two trophies about him as a fighter, unlocked by completing the Adventure and All-Star modes respectively with Falco on any difficulty.

Falco Lombardi
A Star Fox team pilot, Falco's constant air of casual indifference belies his precise piloting skills. He avoids discussion of what he did before joining the team, but many consider it likely that his past was filled with reckless behavior. He's not much for cooperation, but he does respect those more skilled than he is.

Falco Lombardi (Smash Red)
Where his leader, Fox, has blinding speed, Falco has his own distinct skills and advantages. He has both a higher jump and a longer reach than Fox, and although his Blaster lacks rapid-fire capabilities, it strikes with shocking force. Unlike Fox, Falco can stop enemies in their tracks with his Blaster fire.

Falco Lombardi (Smash Blue)
Falco's amazing jumping abilities have many merits, but it's vital to realize that it comes at the cost of some attack power and defensive strength. He falls at a high speed, which disrupts potential attackers, but this also prevents successful recoveries occasionally. Hit an opponent with Reflector, and he or she will fly straight up; this is Falco's quickest attack. 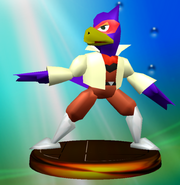 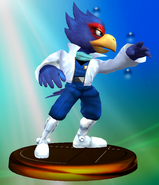 Retrieved from "https://supersmashbros.fandom.com/wiki/Falco_(Super_Smash_Bros._Melee)?oldid=564737"
Community content is available under CC-BY-SA unless otherwise noted.