Extreme Speed (しんそく, Shinsoku?, lit. "Godly Speed"; originally formatted as ExtremeSpeed until Generation VI) is Lucario's Up Special Move. When used, Lucario stops for a brief moment, and then rushes in the direction chosen.

It is possible to change directions during the dash (where Lucario will appear to "bend" through the air), as well as being able to Wall Cling if it comes in contact with a wall, making it a very useful recovery move. However, Extreme Speed deals no damage, and as such, should only be used for either escaping attacks or recovery. Lucario has low knockback while using this move, and it has a large sweet spot, making ledge-grabbing easier. This enables Lucario to have one of the best recoveries in the game, being even greater if there is a wall to cling to.

If tap jump is disabled and the player performs Extreme Speed ending on the ground, Lucario will be unable to perform it again until it jumps. 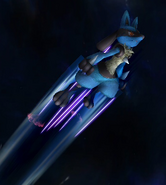 Lucario using Extreme Speed.
Add a photo to this gallery

In SSB4 the move can be customized to Ride the Wind or Extreme Speed Attack.

Ride the Wind flies through the air longer but slower than Extreme Speed. It doesn't do damage.

Extreme Speed Attack leaves Lucario vulnerable at the start, but sends opponents flying at any point during the dash.

Extreme Speed Attack.
Add a photo to this gallery

The Subspace Emissary boss Rayquaza also uses Extreme Speed as an attack, in which it dashes back and forth across the screen, dealing damage and high knockback, unlike Lucario's recovery only version.

Rayquaza using Extreme Speed.
Add a photo to this gallery

Extreme Speed can be also be used to quickly grab the edge to edge-guard a player attempting to grab it. If the player uses the move, but holds down as the direction, Lucario zooms across the floor to the right. By going over the lip of the ledge, still holding down, Lucario will almost instantly grab the ledge. If the player wants to go left, it's a little harder, since left-and-down must be pressed diagonally.

Retrieved from "https://supersmashbros.fandom.com/wiki/Extreme_Speed?oldid=472078"
Community content is available under CC-BY-SA unless otherwise noted.