By holding the Special Move button, Ike continues to hold Ragnell over his head, and the move continues to charge. As Ike charges, flames will gather around Ragnell and a charging sound effect will play, and Ike will begin flashing (orange in Brawl, blue in SSBWU/3DS). While charging, Eruption will go through eight stages of charging, which determines the damage and range of the explosion. As Eruption progresses through each stage, more flames will gather around Ragnell, the charging sound will speed up, and Ike will flash faster. After five seconds, Ike will automatically release Eruption fully charged (indicated by a battle cry in Brawl and a flash at Ragnell's point in SSBWU/3DS), inflicting 10% recoil damage.

As stated before, Eruption goes through eight stages of charging before entering its fully-charged state. An uncharged Eruption (referred to as stage one) deals 10% damage with some knockback, and a fully-charged Eruption (referred to as stage nine) deals 37% damage with high knockback, and all other stages in between dealing 14-34% damage. However, a stage eight Eruption deals 39% damage and has OHKO potential in Brawl, making it one of Ike's powerful moves but extremely difficult to actually use.

In Super Smash Bros. for Nintendo 3DS and Wii U, Eruption charges much faster and Ike is able to release a fully-charged Eruption without inflicting recoil damage. As a drawback however, it no longer has the capacity of OHKO'ing, and only grants Super Armour when fully charged. The flames are now blue to match Ike's title in Radiant Dawn.

Eruption primarily deals vertical knockback and fiery damage, but expands its range horizontally when charging. These properties, combined with its damage, grant Ike a powerful edgeguarding option and good interrupting option. In addition, a mid-charged to fully-charged Eruption serves as one of Ike's KO options, particularly against lightweights. However, care must be taken when charging, as it leaves Ike vulnerable to punishment if he chooses to charge Eruption to KO potential. 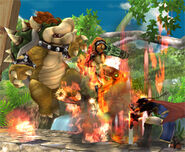 Eruption in an early version of Super Smash Bros. for Wii U

Eruption in Super Smash Bros. for Nintendo 3DS
Add a photo to this gallery

Tempest is one of Ike's Neutral Special Moves that can be used via customizations. Ike creates a gust a wind around him.

The Tempest custom variation, like the default Eruption variation, is a good edge-guarding tool, but for different reasons. The windboxes on the move can push recovering opponents away from the edge; the move has good launch behind it when fully charged but deals far less damage and is not a kill move either. hen fully charged it will deal no recoil damage though; Tempest has greater horizontal launch than vertical, so the way in which it is used is a bit different from the default.

Furious Eruption is one of Ike's Neutral Special Moves that can be used via customizations. Ike creates a much stronger and wider explosion.

The Furious Eruption custom variation has a larger explosion and as such, a larger hitbox; it also deals more damage and kills earlier. The move takes longer to charge up completely and also deals more recoil damage to Ike when used at full charge. Similar to the default variation, the move is useful for edge-guarding.

Furious Eruption
Add a photo to this gallery

Graphically, it resembles the animation of the Bolganone spell in Fire Emblem: Path of Radiance. In Super Smash Bros. for Nintendo 3DS and Wii U the attack was changed to blue, referencing Ike's title as "the Hero of Blue Flames".

Retrieved from "https://supersmashbros.fandom.com/wiki/Eruption?oldid=575884"
Community content is available under CC-BY-SA unless otherwise noted.