Elwind (エルウインド) is Robin's Up Special Move. Robin fires two blasts of wind downward that lift him up and deal damage to anyone below him.

Robin shoots two blasts of wind downward, damaging anyone in the way while pushing himself upward. The first Elwind blast gives a decent height, while the second blast causes vertical knockback gives the most lift to Robin. If the first Elwind hits while touching Robin's lower half, a Meteor Smash will occur.

Like all of their tomes, however, it can only be used a certain amount of times. Wind tome has a durability value of 18 uses. However, this tome's durability is also decreased whenever Robin uses his rapid jab combo, and that may cause the durability to decrease to an odd number, which means he'll only be able to shoot one blast of wind. The tome respawns after roughly 5 seconds.

Elwind should only be used for recovery, never for attack. If it is used to attack opponents, Robin will be left helpless and can be easily punished, and on top of that Robin will find themselves without a recovery from having used it too much as an attack.

Elwind damage: 5% on first hit, 5% on second hit. If hitting at the start of the first attack, it Meteor Smashes and deals 7%.

Soaring Elwind (変則エルウインド) is one of Robin's Up Special Moves that can be used via customization. The first wind blast will send Robin a shorter distance, but the second blast will send him a very high distance. There is less room to angle.

Soaring Elwind is a custom variation for players who want more vertical recovery distance out of their up special. Unfortunately, the greater recovery height results in less horizontal influence as well. The first Elwind blade gives Robin very little distance, and so he is left open to gimps and meteor smashes at the start of the move until the second Elwind blade is launched. Once the second Elwind is launched, Robin is propelled upwards a great height and at a fast speed. The Elwind blades do not meteor smash which makes the move worse for edgeguarding recovering opponents.

Gliding Elwind (スラストエルウインド) is one of Robin's Up Special Moves that can be used via customization. The first blast of wind will send Robin at a forward angle and the second will only transport him a short distance upwards.

The Gliding Elwind is the custom variation for players that want more horizontal movement from their recovery move. The Gliding Elwind has more forwards movement and as a result has less vertical height. Both of the Elwind blades will meteor smash opponents hit by them; standing on the edge and facing away from it and then using Gliding Elwind from the ground can meteor smash recovering opponents and even get two-frame punishes, making it a useful edgeguarding move. Trying to meteor smash opponents with the move from the air is trickier to do since it needs to be timed and spaced correctly to hit them with the Elwind blades. 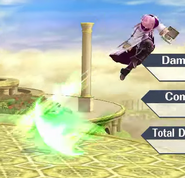 The first blast of Gliding Elwind 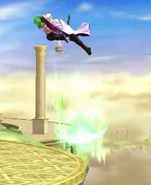 Elwind is a second level wind magic tome that first appears in Fire Emblem: Genealogy of the Holy War.

Retrieved from "https://supersmashbros.fandom.com/wiki/Elwind?oldid=577903"
Community content is available under CC-BY-SA unless otherwise noted.