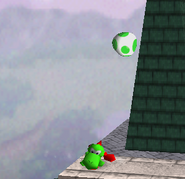 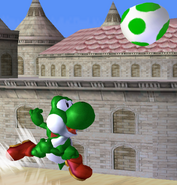 Yoshi using Egg Throw.
Add a photo to this gallery

In Super Smash Bros 3DS/Wii U, Egg Throw can be customized to become High Jump or Timed Egg Throw

High Jump causes Yoshi to jump extremely high, and can be used more than once in midair. This gives Yoshi an unbelievable recovery, but Yoshi no longer throws eggs and as such does no damage.

Timed Egg Throw causes Yoshi to lob an egg that can pass through opponents and then explode.

Retrieved from "https://supersmashbros.fandom.com/wiki/Egg_Throw?oldid=452146"
Community content is available under CC-BY-SA unless otherwise noted.