Egg Roll is Yoshi's Side Special Move. Yoshi encases himself into an egg and starts rolling, similar to Rollout and Spin Dash.

The player can steer it by pressing left or right, and stop the attack by pressing B again. In Melee, it can be used to increase Yoshi's horizontal recovery. It is easily countered, but acts as an efficient way to pass an edgeguarder when Yoshi is off-stage, but if the opponent can reach the egg's height and hit Yoshi it is essentially followed by a death. If preferred, the player controlling the move may wish to hold the B button. This makes it more difficult to control, but allows more damage.

In Brawl, Yoshi's air speed is decreased while using the Egg Roll, making it useless as a recovery move. Also, it is notoriously easy to Self-destruct with, as Yoshi becomes Helpless if used in midair, and running off platforms with Egg Roll is easy. 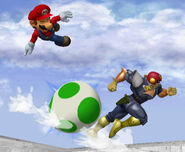 Heavy Egg Roll is one of Yoshi's Side Special Moves that can be used via customizations. Yoshi transforms into an egg and rolls very slow, though he is able to deal higher damage.

The Heavy Egg Roll custom variation is excellent for securing kills because of its high damage and knockback. However, it is difficult to hit with since it is very slow and can easily be jumped over or punished with an extended grab. On top of this, the high starting and ending lag and the general slow speed of the move overall make it difficult to land since it cannot combo out of or into anything at all.

Light Egg Roll is one of Yoshi's Side Special Moves that can be used via customizations. Yoshi transforms into an egg and rolls while bouncing, the move has less time than the default. When used in the air, Yoshi will not move, causing a self-destruct.

Light Egg Roll is a move for players that want more speed our of their Egg Roll. The Light Egg Roll is faster, covers more distance, and has a bounce at the start that can hit short-hopping opponents. If used in the air, Yoshi will not move at all and can self-destruct if this is done off-stage. The move doesn't last as long but since it covers more distance it can be a great move for retreating to the other side of the stage for some recuperation or to throw out some projectiles. It deals less damage but could also be used as an approach option.

The move seems to be unique to the Super Smash Bros. series, but may be based on Yoshi's Story where upon eating a Turbo Tulip, Yoshi could encase himself into an egg and fling himself at enemies or out-of-reach objects. The Egg Roll would later appear in Mario Power Tennis and Mario Strikers Charged.

Retrieved from "https://supersmashbros.fandom.com/wiki/Egg_Roll?oldid=569920"
Community content is available under CC-BY-SA unless otherwise noted.