Egg Lay is Yoshi's Standard Special Move in all Super Smash Bros. games to date. He sticks his tongue out, pulling in and swallowing any enemy touched near by, turning them into an egg for a few seconds.

The amount of time that the enemy remains in the egg is determined by how much damage they have. While trapped in an egg, one is open to attacks, although cannot be knocked back. Tilting the control stick back and forth will help the victim escape the egg more quickly. It can grab an opponent out of a shield, unless that opponent is invincible.

It is important to note that Yoshi has a few Super Armor frames in this move. From the second his tongue latches onto another character to the moment the egg is laid, Yoshi gains 120% knockback resistance. This is useful for 4-player battles, as the attack itself only affects one opponent, so Yoshi would potentially be vulnerable - the resistance negates that vulnerability. Another important aspect of this move is that it acts as an aerial grab, giving it high priority over many other aerial attacks. The only other aerial grabs are Ganondorf's Flame Choke, Bowser's Koopa Klaw, and Wario's Chomp.

Egg Lay can be used in an attempt to put the opponent off-stage, but unlike suicide techniques, such as Koopa Klaw and the Swallowcide, opponents tend to always break out long before they make it below the stage, it won't matter if they are at higher percents, unless he opponent is metal. If used in the right hands, Egg Lay can KO characters with bad recovery.

The egg encasing the opponent in Super Smash Bros. 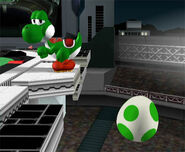 The egg encasing the opponent in Super Smash Bros. Melee.

The egg encasing the opponent in Super Smash Bros. Brawl.

Egg Lay in Super Smash Bros. 3DS/Wii U
Add a photo to this gallery

Lick is one of Yoshi's Neutral Special Move that can be used via customizations. Yoshi uses his tongue to "lick" the opponents, he's not able to transform them in eggs.

Yoshi using Egg Launch.
Add a photo to this gallery

Since his first appearance in Super Mario World, Yoshi's trademark move has been gulping his enemies using his chameleon like tongue. However, since Super Mario World 2: Yoshi's Island, Yoshi has been able to turn his eaten enemies into eggs. Throwing these eggs at enemies would be Yoshi's primary attacking method.

Retrieved from "https://supersmashbros.fandom.com/wiki/Egg_Lay?oldid=471213"
Community content is available under CC-BY-SA unless otherwise noted.