Eggs are container Items appearing in Super Smash Bros. and Super Smash Bros. Melee and hold only 1 item. They appear from the Pokémon Chansey or randomly on Yoshi series and Trophy Tussle stages. Eggs function identically to Capsules.

Eggs are also present in the Melee stage Mushroom: Kingdom II. They are projectiles used by Birdo, and can be grabbed if the player uses an air dodge. They can also be reflected and greatly resemble the eggs from Super Smash Bros..

Eggs are basically the same as Capsules, in that they'll release items when you break them open. They've been known to explode, too. The likelihood that certain items may be inside Eggs depends on the type of stage being played. Sometimes Eggs will contain health-replenishing food items; other times, they may hold weapons. 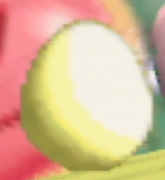 The Egg, as it appears in Super Smash Bros..

The Egg, as it appears in Super Smash Bros. Melee.
Add a photo to this gallery

Retrieved from "https://supersmashbros.fandom.com/wiki/Egg?oldid=583940"
Community content is available under CC-BY-SA unless otherwise noted.