This article is about the Duck Hunt's appearance in Super Smash Bros. for Nintendo 3DS and Wii U. For other uses, see Duck Hunt.

Duck Hunt, known as Duck Hunt Duo in Europe, is a duo of playable characters in Super Smash Bros. for Nintendo 3DS and Wii U. They were revealed via a live stream made from people who received Super Smash Bros. for Nintendo 3DS early, and were one of the last characters to be officially revealed. They were the last newcomer to be officially revealed. They are from the classic NES game Duck Hunt.

After completing any option, the player must fight and defeat Duck Hunt on Battlefield.

After completing either option, you must fight and defeat Duck Hunt on Duck Hunt (stage).

Duck Hunt consists of a dog known by fans as the "Duck Hunt Dog" or the "Laughing Dog", a duck, and a unseen player holding a NES Zapper. The dog is infamous for laughing at the player if they miss a duck.

Good aerial play. The duck hits pretty fast and his aerials are quite deadly. When hit right at the beak, can deal some nasty damage and knockback, especially his up aerial.

He can also put up a lot of pressure using his three specials.

Trick Shot is a difficult, yet versatile projectile that can provide the greatest pressure out of all his projectiles due to its damage and knockback from detonation. The versatility comes from shooting the can. Position is key.

Clay Shooting can provide quick and long range pressure and damage. All three shots are quite easy to land as long as the disk is close to the enemy or hits them.

Wild Gunmen may seem simple, but their quick projectiles make them a good pressuring tool; especially the leader, whose draw is incredibly fast.

Duck Hunt's weaknesses are his lightweight and hefty end lag from his specials and smash attacks. This makes Duck Hunt a high-risk character, focusing on pressuring the enemy from a distance before using either a smash attack, or a sweet-spotted aerial.

You could call these two the stars of the NES 1985 launch title Duck Hunt. The goofy dog would chase down any ducks hit by the Zapper. In Smash Bros., these two work as a team to fight. When a can or clay pigeon is in play, hit the button again to fire at it. Show your foes how the ducks felt!

Empty cans just like this appeared in the NES game Hogan's Alley. In the Trick Shot mode, you got points depending on which area you knocked them into. In Smash Bros., Duck Hunt's default standard special sends a can flying in an arc. It'll explode if it hits an opponent, or you can press the special button again to shoot at it.

In the NES game Duck Hunt, the dog is your trusty hunting partner. He scares the ducks and then picks up the ones you hit. So if you don't hit any, though, he'll laugh at you. So much for man's best friend... In the Duck Hunt stage in this game, he'll occasionally pop up in his 8-bit glory and let you use him as a platform!

In the classic NES game Duck Hunt, you hunt, er...ducks. The dog flushes them into the air, and then you aim and fire. Taking down ducks gets you points in the Duck Hunt stage in this game too. It has no effect on the battle, but the alternative Duck Hunt action might be a refreshing change from constantly punching your friends in the face. 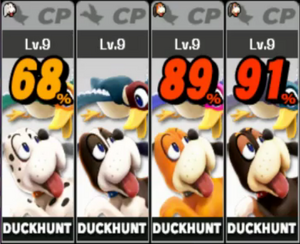 Duck Hunt in his fighting stance.

Duck Hunt performing one of his taunts.

Duck Hunt in one of his alternate colors (dalmatian color).

Duck Hunt about to perform his Final Smash.

One of Duck Hunt's victory animations.

One of his Congratulations pictures.

Another one of his congratulations pictures.

Duck Hunt performing his Up Smash. 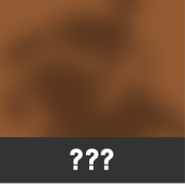 Duck Hunt as they appear in the Official Website. Note that their image is blurry, since they are secret characters.

Duck Hunt being screen KO'd.
Add a photo to this gallery

Retrieved from "https://supersmashbros.fandom.com/wiki/Duck_Hunt_(Super_Smash_Bros._for_Nintendo_3DS_and_Wii_U)?oldid=465261"
Community content is available under CC-BY-SA unless otherwise noted.