In-game sprite of the dog and some ducks as they appear in Duck Hunt.

Hiroji Kiyotake
Duck Hunt (ダックハント, Dakkuhanto?) is the collective name of a trio formed by the dog, a duck, and an unseen hunter from the Zapper Light Gun game released for the Nintendo Entertainment System in 1984 titled Duck Hunt. Duck Hunt makes an appearance as a playable character in Super Smash Bros. for Nintendo 3DS and Wii U and Super Smash Bros. Ultimate.

Throughout Duck Hunt, the goal is to shoot all of the ducks with a limited amount of bullets and time. By plugging a controller into the player 2 slot in the NES, a duck can be controlled to a limited extent by another player.

The hunter is the playable character in all versions of Duck Hunt and is supposed to represent the player. Accompanying the player is a non-playable scent hound, who flushes out the ducks for the hunter to shoot and picks up any ducks that are shot down by the player. If the player fails to shoot down any ducks, the dog infamously laughs at the player's misfortune before slinking back down into the grass. While the home console version does not allow players to shoot the dog, the arcade version, Vs. Duck Hunt, allows players to shoot the dog in the bonus rounds. However, successfully shooting the dog immediately ends the bonus round and yields no points as well as showing the dog, now ashen-faced, bandaged and on crutches, angrily admonishing the player.

The dog himself has long been considered one of video gaming's most hated characters for his tendency to laugh at players who can't hit the fast-moving ducks leading to many parodies where players shoot the dog as payback. The dog's appearance in the Super Smash Bros. series may be the coda for all of this, while ironically granting the dog some popularity at last.

The ducks from Duck Hunt appear as a collectible trophy.

Ducks
These friendly fowl are the targets in the game Duck Hunt, which utilizes the Nintendo Zapper Light Gun. They appear and randomly fly about trying to escape after your faithful (if slightly clamorous) hunting dog flushes them out. Once you drop the ducks, your dog dutifully fetches them by the napes of their necks and grins at you. 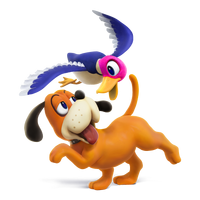 Duck Hunt appears as an unlockable playable character in Super Smash Bros. for Nintendo 3DS and Wii U. Unlike the other team-oriented fighters in the game, Duck Hunt are a trio, which consists of the dog, a duck and an off-screen hunter who wields the NES Zapper. Their special moves also include the five gunmen from the NES game Wild Gunman and a can from the "Trick Shot" minigame from Hogan's Alley, both of which were also light gun games contemporary to Duck Hunt. The hunter fires shots for their smash attacks and their special moves Trick Shot and Clay Shooting.

Duck Hunt
You could call these two the stars of the NES 1985 launch title Duck Hunt. The goofy dog would chase down any ducks hit by the Zapper. In Smash Bros., these two work as a team to fight. When a can or a clay pigeon is in play, hit the button again to fire at it. Show your foes how the ducks felt!

Duck Hunt (Alt.)
Duck Jump, an up special, has the charming twosome float up in an adorable fashion. It also makes getting back to the stage much easier. Their side smash can hit up to three times at close range, depending on your shooting skills. By charging up the attack, you can increase the range even further!

Dog
In the NES game Duck Hunt, the dog is your trusty hunting partner. He scares the ducks and then picks up the ones you hit. If you don't hit any, though, he'll laugh at you. So much for man's best friend... In the Duck Hunt stage in this game, he'll occasionally pop up in his 8-bit glory and let you use him as a platform!

Duck
In the classic NES game Duck Hunt, you hunt, er...ducks. The dog flushes them into the air, and then you aim and fire. Taking down ducks gets you points in the Duck Hunt stage in this game too. It has no effect on the battle, but the alternative Duck Hunt action might be a refreshing change from constantly punching your friends in the face.