Drill Rush (ドリルラッシュ, Doriru Rasshu; formerly named the "Triple Dash") is the name of Meta Knight's Side Special Move. Meta Knight leaps backward via a brief backflip, and whirls forward in the fashion of a drill with his blade outstretched. 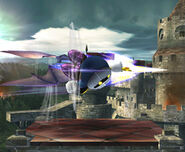 Drill Rush aimed right.
Add a photo to this gallery

The High-Speed Drill is for players that want greater horizontal recovery from the Drill Rush. The move travels faster and farther than the default variation, but it will still leave Meta Knight helpless after use. The angle of the attack cannot be changed, so the attack is unable to be used for carrying opponents across the stage.

The Shieldbreaker Drill, as the name implies, deals more shield damage. However, it deals less damage to opponents and does not travel as far. The move leaves Meta Knight helpless after use and the shorter distance of the move makes it poor for use as a recovery move.

Retrieved from "https://supersmashbros.fandom.com/wiki/Drill_Rush?oldid=574318"
Community content is available under CC-BY-SA unless otherwise noted.