The Dragoon is broken up into three parts: the nosecone, the body and the tail. Each part will appear during a match at a random location, where they can be collected by "attacking" them. The part that the character collected is indicated by a smaller icon on the left side of the damage meter. The part remains in the character's possession unless they are KO'd or if they take enough damage to lose it, which will enable the part to be grabbed by other characters. Parts that fall off the stage will reappear after some time passes

Upon collecting all three parts, the user will form the Dragoon and hop onto it then fly off-screen. A targetting reticle will appear, which the player can guide to aim the Dragoon, which can be fired by pressing the attack button. A beeping sound will play during the aiming sequence, and after ten beeps the Dragoon will automatically be fired. If the Dragoon makes contact with an opponent (signalled by the ping sound), they will be inflicted 40% damage and very high knockback, enough to OHKO. After firing, the character will return to the stage by falling from the upper blast line. The character is invincible from the moment they collect the final part to after firing the Dragoon.

Because the reticle moves quickly and opponents have time to move before the Dragoon is fired, it can be difficult to effectively use the item; consequently, it can be very difficult to dodge the attack as it requires precision, particularly for heavyweight characters.

The Dragoon parts only appear once per match, and will not always appear every match. They will not appear if a Smash Ball is in play, but they can appear alongside the Daybreak parts in Super Smash Bros. for Wii U. In Team Battles in 3DS/Wii U, teammates share the Dragoon parts, and the player who collects the final part will assemble the Dragoon.

In Ultimate, a timer bar was added on the bottom centre of the target screen to show the time left before it automatically fires.

Part A: The nosecone

Part B: The body 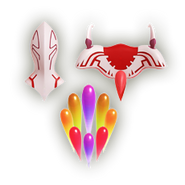 Kirby riding the Dragoon in Super Smash Bros. for Nintendo Wii U.

Aiming the attack in the Wii U version of SSB4

An attack-capable Air Ride machine you can assemble by combining parts A, B, and C. You can knock off parts held by foes in combat, so stealing parts is something that's sure to occur. In Kirby Air Ride, you control legendary machines, but the Dragoon not only towers above all others in terms of speed, it is also able to fly.

Collect parts A, B, and C to assemble the legendary Air Ride machine known as the Dragoon. Take careful aim, and then ride it toward your target, A hit will send enemies flying out of the battle. Taking damage before you've collected all the parts can knock them from your grasp, however.

The item comes from Kirby Air Ride, in which the Dragoon had to be constructed in a similar manner. It is one of two legendary vehicles, the other being the Hydra. The Dragoon is known for its flight abilities, while the Hydra is extremely fast and has a great offence. The Dragoon and Hydra also have very high health compared to other machines in the game.

The Dragoon in The Subspace Emissary.

Kirby piloting the Dragoon in The Subspace Emissary.