Dr. Wily is the antagonist of the main series Mega Man games. Formerly a colleague of Mega Man's creator Dr. Light, the two had a falling out, resulting in Dr. Wily reprogramming six of Dr. Light's robots, which Mega Man eventually fought. Since then, he had created his own robots and has built many fortresses in which he's the final boss, and at the end of every single game he always ends up on his knees and begs Mega Man for mercy, although most of the time he still escapes.

Dr. Wily's first appearance inside the Wily Capsule was in Mega Man 4, and since then, it has been part of his final battle, with the exception of Mega Man 11.

Dr. Wily appears as a trophy in both versions of the game.

"A mad scientist from the Mega Man series who develops deadly robots to try and take over the world. He's not above stealing the robots made by other scientists and modifying them for his own evil ends, either. Dr. Wily has a tendency to beg for forgiveness when Mega Man inevitably defeats him; those tears don't look all that genuine, honestly..." 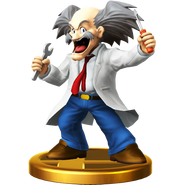 Dr. Wily's trophy in Super Smash Bros. for Wii U 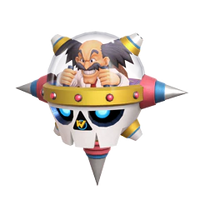 Dr. Wily appears as an Assist Trophy in the form of the Wily Capsule (ワイリーカプセル, Wily Capsule), specifically the form present in Mega Man 7. When summoned, he fires fire, ice, and lightning projectiles at opponents. He can also attack characters by ramming into them while spinning which does high damage and knockback. When the machine is destroyed, Dr. Wily falls to the ground and begs for mercy.