This article is about Dr. Mario's appearance in Super Smash Bros. for Nintendo 3DS and Wii U. For other uses, see Dr. Mario. Also, for information about the character of whom Dr. Mario is a clone, see Mario.

Dr. Mario (Dr. マリオ, Dr. Mario) is a playable character and returning veteran in Super Smash Bros. for Nintendo 3DS and Wii U. His moveset from Melee has been brought back. He was officially confirmed on October 9th, 2014 alongside Dark Pit as an unlockable character, in a post-release announcement.

Dr. Mario currently ranks 49th on the tier list. People now view the 'Good Doctor' as a "worse version of Mario", and for good reason. He is less mobile in every way with slower speed, lower jump height and a weaker recovery. His combo game is also seen as worse than Mario's as he can follow up less easily from throws. However, Dr. Mario's kill power is more impressive than Mario's and he does more damage in general, meaning his punish game is debatably better.

Much like his original counterpart, Dr. Mario is an All-Rounder type of character, however focusing on Bait and Punish tactics. While sharing animations, Dr. Mario is overall slower and stronger than Mario, trading agile movement for more power.

Dr. Mario has more options for KO'ing compared to Mario, with all his moves having higher base knockback, most notably his Smash Attacks, Back Aerial and Super Jump Punch. His Forward Smash, while having much more power than Mario's, and it's sweetspot is at his palm, it lacks the extended range since there is no burst of flame. With a combination of manipulating Stale-Move Negation and making use of Rage, Dr. Mario can score reliable kills.

His combo game, however, is very different and less effective than Mario's relying mostly on reading the opponent and punish accordingly rather than stringing moves together. Since his attacks deal more knockback, the combo potential is hindered, specially against lighter opponents such as Kirby and Jigglypuff. This becomes even more of a problem due the slower movement speed, meaning he doesn't have some follow ups that Mario has. He does, however, performs great against middle and heavyweight opponents, having a good variety of follow ups from his Down Throw and Down Tilt.

As for his Special Moves, they function much like Mario's. Megavitamin are exactly like Fireball, but travel slower, bounce higher in the air, and cannot be absorbed. Super Sheet covers more vertical distance than Mario's Cape, but at the cost of its potential as a recovery move, as it no longer stalls him in midair like it did in Melee. Dr. Tornado grants Dr. Mario extra distance when used properly, as well racking up easy damage and can also KO. Super Jump Punch is a quite potent move that KO at earlier percentages with rage, with high power at the base and a sourspot throughout the rest of its duration.

Dr. Mario's flaws lies in his slow movement speed for a character of his power and size. He also has trouble against characters that can outrange him, such as those with weapons, like Shulk and Cloud, which boasts from disjointed hitboxes, meaning they will always have the upper hand when clashing with Dr. Mario's attacks. His recovery can be predictable without mix ups, while Super Jump Punch has very high priority, it is predictable, doesn't cover much distance, and can be interrupted. For that reason, players should be good at reads to prevent enemies from frustrating their recovery.

Overall, Dr. Mario is a strong character, with a solid moveset, but because of his poor mobility and short range, players must use a much more patient playstyle in comparison to his original counterpart. As a result, Dr. Mario's main tactics relies on him staying at the stage, reading and punishing mistakes with his Smash Attacks and Down Tilt and Down Throw combos.

Dr. Mario has been balanced match him with the other characters for the Wii U and 3DS versions. He was overall more nerfed than buffed, where in Melee he was among the top tier characters. He is even slower, and the universal changes in hitstun reduced his combo potential.

Appearance-wise, his coat is more detailed, and he also wears a shirt with a red tie under it, similar to his design in Dr. Mario 64. 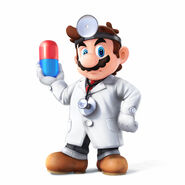 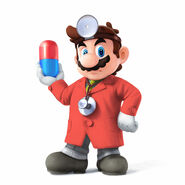 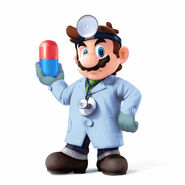 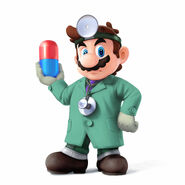 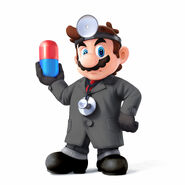 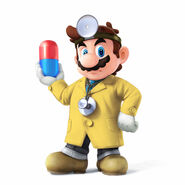 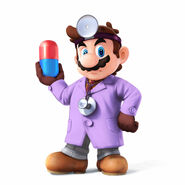 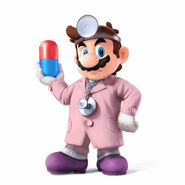 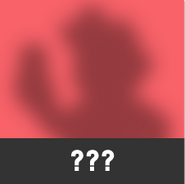 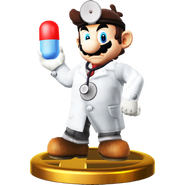 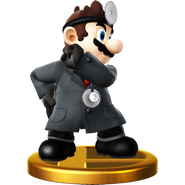 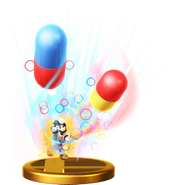 Dr. Mario's Wii U Final Smash Trophy
Add a photo to this gallery

Retrieved from "https://supersmashbros.fandom.com/wiki/Dr._Mario_(Super_Smash_Bros._for_Nintendo_3DS_and_Wii_U)?oldid=552966"
Community content is available under CC-BY-SA unless otherwise noted.