This article is about Dr. Mario's appearance in Super Smash Bros. Melee. For the character in other contexts, see Dr. Mario; for information on the character of whom Dr. Mario is a clone, see Mario.

Charles Martinet
Dr. Mario (Dr. マリオ, Dr. Mario) is an unlockable character in Super Smash Bros. Melee, and is a clone of Mario, meaning almost all of their moves are exactly alike, though Dr. Mario and Mario do have some differences in their attack physics.

Dr. Mario currently ranks 13rd on Melee's tier list for his great combos and overall uniqueness as a fighter, and is, of course, a "clone" of Mario. 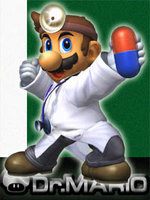 Dr. Mario is very similar to his original, but there are differences between them. Overall, Dr. Mario is slightly stronger than his counterpart. Dr. Mario's projectile, Megavitamins, can help control approaches, but it moves rather slowly when compared to other projectiles. Dr. Mario is a good edgeguarder due to his Back Aerial, Super Sheet, and the aforementioned Megavitamins. He also has a good aerial game, wavedash, and SHFFL.

He can chain grab some characters and Down Throw to Forward Aerial as a staple KO. Dr. Mario's biggest weakness is his very short recovery. His Super Jump Punch is a predictable recovery move that can be caped and edgeguarded fairly easily, although having a misleadingly large sweetspot range helps this problem. Dr. Mario's Back Throw is ideal for gimp kills when accompanied by edgehogging, since it has powerful knockback.

Many techniques will need to be abused for this, so practice is recommended.

Next, jump on to the 2nd platform above. It should be close to the targets on the left side of the metal wall. Dash Jump, cape BOTH TARGETS AT ONCE, and double jump back to the platforms to the left. A F-Air also works for this.

In addition to the normal trophy about Dr. Mario as a character, there are two trophies about him as a fighter, unlocked by completing the Adventure and All-Star modes respectively with Dr. Mario on any difficulty.

Dr. Mario (Smash Red)
There's hardly any difference in the abilities of Mario and Dr. Mario, so choosing is largely a matter of taste. Dr. Mario is a tad slower due to his lack of exercise, but his Megavitamins pack a bit more punch than Mario's Fireballs. The capsules travel on a unique trajectory and make a distinct sound on impact.

Dr. Mario (Smash Blue)
The differences between Dr. Mario and Mario are more pronounced in some areas than others, but basically they can be played in a similar fashion. While it may be hard to spot the contrasts, they do exist. For example, Dr. Mario's Super Sheet is longer and narrower than Mario's cape, and any opponents hit by Dr. Tornado will fly off in diverse directions.