Dr. Mario (Dr. マリオ, Dokutā Mario?) is a doctor-costumed version of Mario that was the star of his eponymous game for the NES, Game Boy, and SNES. He also stars in Dr. Mario 64 for the Nintendo 64, Dr. Mario and Puzzle League for the Game Boy Advance, Dr. Mario Online Rx, which is a new game for Wii's Wii Ware and Dr. Mario Express, which is a new game for the DSi's DSiWare. He was introduced in Super Smash Bros. Melee, where he is an unlockable character. However, he is not included in Super Smash Bros. Brawl. 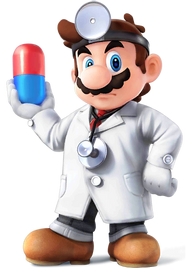 After his absence in Brawl, Dr. Mario is set to return in Super Smash Bros. for Nintendo 3DS and Wii U as a playable character.

Retrieved from "https://supersmashbros.fandom.com/wiki/Dr._Mario?oldid=440525"
Community content is available under CC-BY-SA unless otherwise noted.