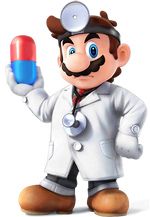 After his absence in Brawl, Dr. Mario is set to return in Super Smash Bros. for Nintendo 3DS and Wii U as an unlockable playable character.

He uses his Melee moveset once again, and plus a Final Smash: Dr. Finale. It is the same as Mario Finale, but instead of Fireballs, Dr. Mario launches two giant-sized Megavitamins.

Retrieved from "https://supersmashbros.fandom.com/wiki/Dr._Mario?oldid=455233"
Community content is available under CC-BY-SA unless otherwise noted.