Although it was discovered with Toon Link, the glitch is not exclusive to Toon Link. In fact, it may not be considered a glitch at all. It is an exploitation of the way that Brawl's physics engine works. With characters who have a Stall-Then-Fall aerial (aka Game and Watch, Sheik, Sonic), if they perform their d-air (or in Ivysaur's case, and u-air) at a certain height they will lag and hover for a while.

Using Toon Link's Down Aerial repeatedly after being thrown or otherwise launched into the air will eventually cause him to perform a small hop, then float in the air for a short time with his sword down in the normal position for his D-Air.

The technique can be used to negate vertical knockback, like all Stall-then-Falls. However, because its movement can be controlled while you are stalled (like Peach's Float) it can be used as a recovery technique to glide back onstage (see the video below). 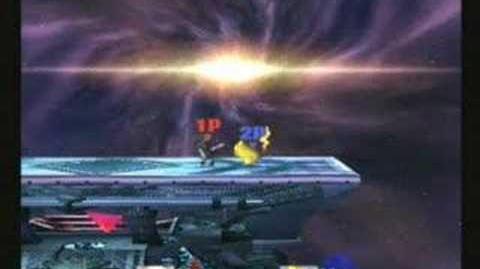 Retrieved from "https://supersmashbros.fandom.com/wiki/Down_air_Stall?oldid=398045"
Community content is available under CC-BY-SA unless otherwise noted.