Double-Edge Dance performs similarly to Dancing Blade, as its input can be changed by tilting the control stick. However, unlike Marth's, Roy's final inputs release a flame effect (with the exception of the final downward hit in Melee, with the flame relegated to the third downward hit), making it more powerful.

In Super Smash Bros. for Nintendo 3DS/Wii U, the animations of Double-Edge Dance have been updated to match the ones Dancing Blade received in Brawl. Each input now no longer requires as much technical precision, making it more reliable for comboing.

Double-Edge Dance has a fast startup, making it one of Roy's most reliable moves, and is more powerful up close due to the flame effect and Roy's closer sweetspot. However, it can be shielded, leaving Roy vulnerable to punishment. 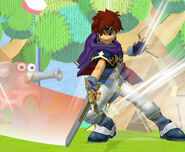 Roy performing Double-Edge Dance against Cloud in Super Smash Bros. for Wii U.
Add a photo to this gallery

Retrieved from "https://supersmashbros.fandom.com/wiki/Double-Edge_Dance?oldid=573519"
Community content is available under CC-BY-SA unless otherwise noted.