Doors are found in the Subspace Emissary to teleport the player into another room. Doors are usually red in color with a pointy top, with blue light shining out from the edges.

Doors act as a checkpoint in the Subspace Emissary. When the player runs out of stocks(i.e. game over) and continues, he/she will appear next to the door that the player had last entered.

Doors also help increase the player's clear percentage. All the doors in all the levels must be entered.

In some stages, the end of the level has a gold, shiny door.

In one room in the Great Maze, there is a large purple door which leads to Tabuu's Residence.

In The Lake stage, there are some doors, namely day-changing doors that are yellow or sky blue, with a triangle in the middle of it. When a player enters that kind of door, they will be teleported into a similar world, but are different in some minor ways, but the most noticeable is the background. One of the areas is during the day, and the other is during the evening. The members of the Subspace Army are different as well. What a player does in one world affects what happens in the other. It is likely that going through one of these doors will transport you forward and backward in time, depending on the color.

There are also day-changing doors in the Great Maze but in the Forest.

In the The Subspace Bomb Factory, there is a locked metal door with three holes (for the jewels to open the door-a red hole for a red ruby, a green hole for a green emerald, and a blue hole for a blue diamond) on it. In the area, there are three gems throughout the section that look like keys. There is a blue diamond, a green emerald, and a red ruby. Hitting one will make the jewel of the same color as the switch shine. Once the three gems are in the proper jewel holes the door to the next room will be activated, the three gems at the door, as well as the edge of the door will shine and the player will be able to pass.

There is also a triple switch door in the Great Maze.

Hidden doors are doors that are not necessary to enter to clear a level. They are hidden in some special ways, e.g. It only appears right after it has been passed by, a switch must have been pressed to make the door appear, etc. Or they are hidden in places where it would be least expected, e.g. an arrow hinting to go down, while the hidden door is actually above, but there are usually some clues as to where they are.

When a hidden door is entered, it will usually lead into a small room with a Turquoise Cube, and an Orange Cube which is harder to reach. The Orange Cube is also necessary for a higher clear %.

There are three special doors which only appear after the Subspace Emissary has been completed. Those three doors can be found in The Forest, The Swamp, and the The Ruins. When they are entered, there will be three challengers that have not appeared in the Story Mode. They are Jigglypuff, Toon Link, and Wolf. Defeating the characters will make them join the party. 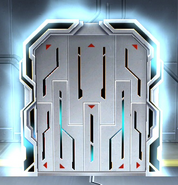 A door found inside the Isle of the Ancients. 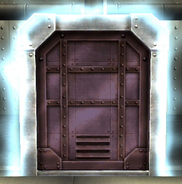 A door found in the Halberd. 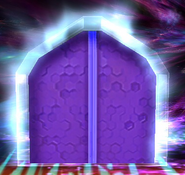 A door found in Subspace.

A save point in the Great Maze.

Door leading to Tabuu's Residence.
Add a photo to this gallery
Retrieved from "https://supersmashbros.fandom.com/wiki/Door?oldid=467048"
Community content is available under CC-BY-SA unless otherwise noted.