Donkey Kong currently ranks 22nd on the tier list. He is strong and heavy, along with having a good throw combo with the 'Ding-Dong Combo', which is good for damage and kill confirms. However, he struggles against fast, combo heavy characters and has bad vertical recovery.

Donkey Kong is a Bruiser type of character, with a good focus as a Grappler style of gameplay. Unlike most heavyweights, he is quite agile, having good attack speed and dashing speed. Nearly all of his attacks have potential KO power, and his super armor during some of them allows him to sustain and even shrug off flinching. This, combined with his heavy weight, makes him greatly benefit from Rage.

His attacks are pretty straightforward: high damage and knockback, while those that lack power can be used for combos. Down Tilt is a fantastic move that can lead to great follow ups; it can combo with itself, and also has a small chance of tripping opponents, which can lead to Forward Tilt, Dash Attack or grab. Up Tilt can also combo with itself at lower percentages, and can lead to many aerial setups. All of Donkey Kong's Smash Attacks are very potent, being able to score earlier KO's due their raw power and range.

Donkey Kong's aerial combat is notable as he has the highest number of Meteor Smashes in the game (Forward and Down Aerials, Headbutt and aerial Hand Slap), all being very powerful and useful as the situation demands. His Back Aerial and Up Aerial can also combo with themselves against opponents with low percentages. Neutral Aerial has high priority and low ending and landing lag, leading to many follow ups if used properly, as well being a good spacing tool.

As for his throws, all of them have great utility. For combos, Down Throw can lead to some guaranteed combos at lower percentages with Forward Tilt or Dash Attack. He can also use the combo setup known as "Ding Dong" by fans, using his Forward Throw (also known as Cargo Throw), where the player jumps once while holding the opponent, throws him/her upwards and finish with Up Aerial, which can lead to earlier KO's on stages such as Battlefield; alternatively, the player can also use Spinning Kong instead of Up Aerial against opponents with low percentages to rack up high damage.

Donkey Kong has very potent Special Moves, all capable of dealing high damage and knockback. A near-fully charged Giant Punch, which is notably more powerful than a fully charged, with higher knockback scaling; while a fully charged grants him super armor frames at the start. His other Special Moves are also able to inflict high shield damage, allowing him to put more pressure on his opponents. Headbutt can break some shields in two or three hits, while Hand Slap also inflicts considerable shield damage in each consecutive hit, being exceptional against opponents blocking near the ledge. Spinning Kong is a great out of shield option that also inflicts considerable shield damage, although lower than his other moves; it also racks up damage quickly while boasting from super armor frames.

His flaws, however, are in his poor vertical recovery (which also means he can't gimp or Meteor Smash opponents near the bottom blast line without suiciding) and his large frame, meaning he is an easy target and can be easily hit and juggled by some characters. His approaches can be hurtful against faster characters, who can punish the ending lag of his moves, and opponents with disjointed hitboxes, that exploit his moves with high range to hit him. Donkey Kong's lack of a projectile also hinders his approach against said types of opponents.

Overall, Donkey Kong is a very potent character with lot of power and speed, and is often considered one of the strongest heavyweight characters. Players must be always in the offensive and use the huge range of his moves to pressure opponents.

Donkey Kong received a quite good amount of buffs. One of the main improvements has been to his overall speed; most of his attacks, such as his Giant Punch, are now performed faster, and his already excellent movement speed has also been greatly increased, allowing him to better keep up with, and in quite a few cases, even out-speed lightweights.

Although he was buffed, Donkey Kong did receive a few noticeable nerfs, mostly to his grab game, which is now slightly weaker (although the "Ding Dong" setup makes him very strong) and his size, which makes him an easy target for juggles and combos.

His design remains mostly the same as in Brawl, but with a brighter color palette, to match his appearance from Donkey Kong Country Returns. His head is also smaller in proportion with his body, as with most of the cast, and his teeth are bright white instead of yellowish. Lastly, all his animations are more fluid, with more expressions to refer to his kinda "goofy" personality.

Up Taunt: Beats his chest.

Side Taunt: Shakes around.

Down Taunt: Looks at the camera, raises his hands to the sides as if to shrug and growls. 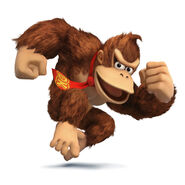 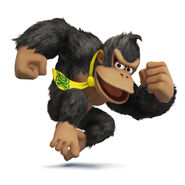 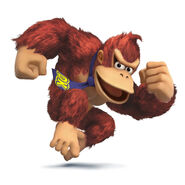 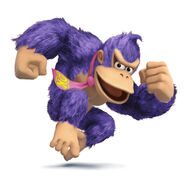 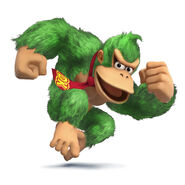 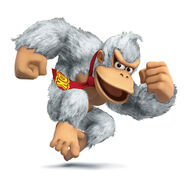 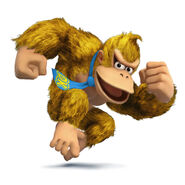 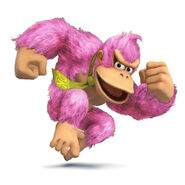 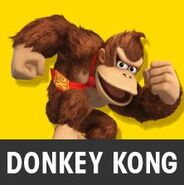 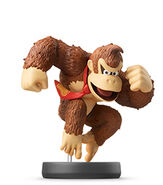 Retrieved from "https://supersmashbros.fandom.com/wiki/Donkey_Kong_(Super_Smash_Bros._for_Nintendo_3DS_and_Wii_U)?oldid=583566"
Community content is available under CC-BY-SA unless otherwise noted.