This article is about Donkey Kong's appearance in Super Smash Bros. Ultimate. For other uses, see Donkey Kong.

Like Diddy Kong and King K. Rool, instead of being played by actor Takashi Nagasako, he uses realistic gorilla sounds.

Donkey Kong was met in the E3 demo build with a degree of cautious optimism. Although players could no longer easily perform the "Ding Dong" combo (now requiring much more precise timing), along with similar throw-based kill confirms from Smash 4, Donkey Kong players were willing to do away with this in favor of better frame data, speed, damage, and hitboxes, most notably on his tilts and dash attack, and hoped that he would play differently from Bowser. Though DK was considered one of the worst heavyweights from the demo, thought to be only marginally better than Ridley, players were excited for Donkey Kong's opportunities in competitive play.

Upon the game's release, however, DK fell out of favor very quickly, for a number of reasons. The biggest issue is his low-percent safety: many of Donkey Kong's moves are punishable on hit at early percents, making his neutral rather egregious in a meta favoring speed and punish games. His already poor disadvantage state was also made even worse due to his later hurtbox and his out of shield options remaining poor. Although Donkey Kong has been buffed in patches, none of Donkey Kong's biggest flaws were addressed. As a result, in the current metagame, he sees use as an occasional counterpick, but not much beyond that; however, some players have been able to come to terms with his flaws and get impressive results, namely YMCA, Runes, HIKARU, ShiNe, Sou, DKwill, and Doctor A Ness. As such, he is commonly ranked as a low tier with some players such as Dabuz and ESAM ranking him as one of the absolute worst characters in the entire game.

Donkey Kong's path presumably refers to New Donk City Hall being the final stage. After defeating Diddy Kong, he becomes Donkey Kong's partner for the rest of the mode.

Donkey Kong was among the fighters that were summoned to fight the army of Master Hands.

During the opening cutscene, Donkey Kong was present on the cliffside when Galeem unleashed his beams of light. Galeem's light beams vaporized Donkey Kong offscreen, placing him under Galeem's imprisonment along with the other fighters, excluding Kirby.

He can be rescued in a jungle segment of World of Light on a space that looks like the treehouse he lives in on his series. In his fight, he is a grab spirit who has 3300 power. 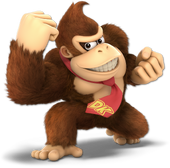 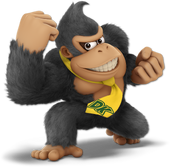 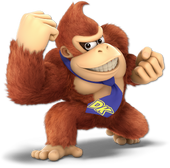 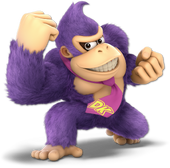 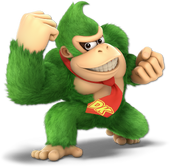 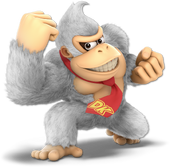 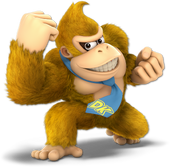 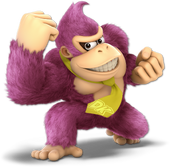 Kirby sucking in DK along with some grapes.

DK performing his up special.

Alongside Diddy Kong on Distant Planet.