This article is about Donkey Kong's appearance in Super Smash Bros. Melee. For the character in other contexts, see Donkey Kong.

He is currently 16th on the tier list due to his good reach, powerful attacks, and above average speed along his speed being a property usually lacking in heavyweight characters. On the downside, he lacks projectiles and has poor vertical recovery. 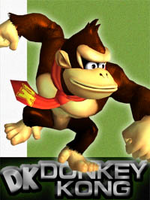 Donkey Kong is the 2nd heaviest character in the game (second only to Bowser), as well as a large target. His attacks are very strong, but many of them also have long startup times. Donkey Kong is faster than one would expect. He has slightly above average dash speed, very fast air speed, fast falling speed, and a high initial jump.

On the downside, he has a small shield which invites shield stabbing. Donkey Kong has very high range, but he lacks projectiles, as well as a sufficient defense against them. Donkey Kong's Up Special Move, Spinning Kong, serves as his recovery move, covering great horizontal distance, but poor vertical distance. This leaves Donkey Kong vulnerable to Meteor Smashes and Spikes. Donkey Kong has a great dashdance, but he has a poor Wavedash.

When it comes to comboing, Donkey Kong can combo certain characters to high percents with his grab to Cargo Throw to Up Throw to Up Aerial juggle combo. He also has good combo finishing moves, such as his charged Giant Punch, Back Aerial, and Forward Aerial. On the downside, Donkey Kong's very heavy weight, large size, fast falling speed, and very long hitstun leave him extremely vulnerable to combos and chaingrabs.

Donkey Kong has received a large mix of buffs and nerfs, but was nerfed overall.

In addition to the normal trophy about Donkey Kong as a character, there are two trophies about him as a fighter, unlocked by completing the Adventure and All-Star modes respectively with Donkey Kong on any difficulty.

Donkey Kong (Smash Red)
Donkey Kong is a huge target in a fight, so he hates crowds. When he's in the fray, his Giant Punch deals serious damage to multiple opponents. The big ape's Headbutt hits so hard that it temporarily buries opponent's in the ground. DK is a lot faster than he looks, and he's lethal in the hands of a master.

Donkey Kong (Smash Blue)
Being the strongest simian around, DK has the upper hand once he grabs an opponent. He can even lift his foe up and make him or her an unwilling traveling companion; if DK grabs you, shake your Control Stick as fast as you can to break his grip. His Spinning Kong covers more lateral distance than vertical, so use it quickly to recover.