As a member of the "perfect-attendance crew", Donkey Kong has been featured as a playable character throughout the entire Super Smash Bros. series.

Donkey Kong's franchise began as his grandfather made his first appearance in the arcade game of the same name. Here, he was the antagonist who held Mario's girlfriend, Pauline, captive over a construction building and was Mario's rival. Mario had to make his way to the top of the tower to rescue Pauline from Donkey Kong Sr. Donkey Kong Sr. would later return in Donkey Kong Jr. which saw his young son rescuing him from the now antagonist Mario. He would once again be featured in Donkey Kong 3 which saw him go up against Stanley the Bugman. At some point between Donkey Kong 3 and Donkey Kong Country, the original Donkey Kong would take the name Cranky Kong and allow the title of Donkey Kong to pass to his grandson.

Donkey Kong Jr. would make another appearance in the 1992 game Super Mario Kart, but the Donkey Kong franchise would not see its own direct game until 1994 Rareware released Donkey Kong Country for the Super Nintendo, which depicted Donkey Kong's first battle with his arch-enemy King K. Rool. Donkey Kong Country was such a massive success that it helped the SNES take the lead in the 16-bit console war. The series was followed by two sequels in which Donkey Kong was, surprisingly, not playable due to being replaced by Dixie Kong.

Additionally, Donkey Kong remains a part of the Mario universe, appearing in many of the Mario spin-off games since Mario Kart 64. DK also appears as a baby in Yoshi's Island DS, the main playable protagonist of the Donkey Kong Adventure story expansion of Mario + Rabbids Kingdom Battle and a major character in the Mario vs. Donkey Kong series.

Like his grandfather, Donkey Kong has also been shown throwing barrels with ease. His strength, however, is even greater in comparison, as shown by his ability to generate damaging sound waves by clapping with sufficient force and, most notably, punching the moon out of orbit during the climax of Donkey Kong Country Returns.

Unlike his grandfather, Donkey Kong also boasts potent hand-to-hand combat skills, as shown in Donkey Kong Jungle Beat and when he is destroying a Slot Machine Barrel. Compared to his grandfather, he is most consistently depicted as a laid-back, simple-minded character who only retaliates when his friends or banana hoard are threatened. While Donkey Kong varies between protagonist and antagonist depending on the game, his intentions are rarely portrayed as truly malevolent. Even in his antagonistic roles, such as Mario vs. Donkey Kong, he is generally depicted as more of a friendly rival to Mario instead of a true nemesis.

While he has switched between appearing as a protagonist and as an antagonist, Donkey Kong has never truly been "evil" and he remains a part of the Mario universe appearing in many of the Mario spinoff games. Donkey Kong also appeared as a baby in Yoshi's Island DS; and in the Mario vs Donkey Kong games, which brings back Mario and Donkey Kong's rivalry from the original Donkey Kong.

Donkey Kong makes his first appearance in a fighting game as a starting playable character in the original Super Smash Bros.

DK is surprisngly fast for his size and is one of the strongest characters in the game. His Neutral B move is the Giant Punch which becomes stronger depending on how long the player lets DK charge it before using it. His Up B is the Spinning Kong which causes DK to spin around wildly with his arms striking anyone nearby. His Down B move is the Hand Slap which allows DK to pound the ground with his fists repeatedly creating a small earthquake. He is ranked 9th out of 12 on the current tier list.

Donkey Kong and Mario started out as arch-rivals, but they've patched things up in recent years. These days DK spends his time searching the jungle for bananas instead of kidnapping beautiful maidens. In the past few years, other members of the Kong family have cashed in on DK's fame as well, including his favorite nephew, Diddy.

Donkey Kong returns in Super Smash Bros. Melee as a starting playable character. His appearance now somewhat resembles his design from Donkey Kong 64, albeit with a yellowish skin tone.

He remains mostly the same from the original, but his new B-Forward move, the Headbutt, allows DK to embed his opponents into the ground giving him some free hits. Donkey Kong is known for his incredible strength, as he is capable of walking and jumping while carrying Crates, Barrels, and Party Balls, items that normally decrease a character's walking speed and cause them to become unable to jump. He is also no longer the heaviest Super Smash Bros. character, the newcomer Bowser is. Donkey Kong is now ranked slightly higher, but is still low-mid tier, being ranked 16th out of 26 on the current tier list in C- tier.

By tradition, Donkey Kong as a playable character is featured on his personal 3 trophies. His normal trophy is acquired by beating the Classic mode with Donkey Kong on any difficulty, and his Smash Red and Smash Blue trophies are acquired the same way by beating the Adventure and All-Star modes, respectively.

Donkey Kong [Smash]
Donkey Kong is a huge target in a fight, so he hates crowds. When he's in the fray, his Giant Punch deals serious damage to multiple opponents. The big ape's Headbutt hits so hard that it temporarily buries opponent's in the ground. DK is a lot faster than he looks, and he's lethal in the hands of a master.

Donkey Kong [Smash]
Being the strongest simian around, DK has the upper hand once he grabs an opponent. He can even lift his foe up and make him or her an unwilling traveling companion; if DK grabs you, shake your Control Stick as fast as you can to break his grip. His Spinning Kong covers more lateral distance than vertical, so use it quickly to recover. 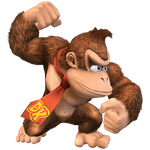 Donkey Kong returns as a starting playable character in Super Smash Bros. Brawl. He is no longer the sole representative of his series, as Diddy Kong appears alongside him as well. His appearance is based on his current design from the Mario spin-off games and the later Donkey Kong games

With new physics in the game, Donkey Kong can no longer be comboed as easily, like in Super Smash Bros. Melee, and his power, range, recovery and speed stats have slightly improved and is no longer in top falling speed.

His Final Smash is the Konga Beat in which DK takes out the Bongos and plays them. By timing their button presses, the attack power can be increased. During this move, DK is invincible, but it is more risky when playing on a moving stage like Rumble Falls, as the stage can move on and he will self-destruct (ironically, Rumble Falls is Diddy's and DK's home stage). Though, the screen scrolls much more slowly while the Final Smash is in action. He also appears as a stage hazard along with springs in the 75m stage. Donkey Kong is now ranked around the middle of the tier list, placing 21st out of 38 in the D tier.

A key part of the 75m stage is the arcade sprite of the original Donkey Kong, who sits on the long platform. He normally sits behind the stage in the background, but will sometimes light up and comes into the foreground. When this happens, the stage's usual background music will briefly fade out and play his theme for a few seconds, giving an opportunity for players to react before he attacks. While he is in the foreground, contacting him causes moderate damage and knockback. Four jacks will also bounce in from the left at irregular intervals (for example, Donkey Kong can throw one jack, briefly pause, and then resume throwing the jacks) and fall after they bounce off the long platform, also causing damage and knockback. After a certain amount of time, Donkey Kong will go back into the background.

Donkey Kong has a trophy that is awarded each time the Classic mode is completed with Donkey Kong on any difficulty. See Konga Beat for the trophy description of Donkey Kong's Final Smash:

Donkey Kong
A carefree jungle dweller with the charisma of a natural leader. He keeps busy by foiling the plans of the Kremlings and their boss, King K. Rool. As his physique suggests, this ape is a powerhouse. He's got speed to match too, and his love for bananas is second to none. His famous necktie is adorned with his initials, DK. 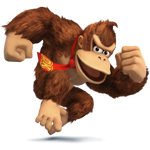 Donkey Kong returns as a playable character in Super Smash Bros. for Nintendo 3DS and Wii U, revealed during the E3 Nintendo Direct on June 11, 2013. His design is now based on his appearances in Donkey Kong Country Returns and Donkey Kong Country: Tropical Freeze. On the SSB4 tier list, Donkey Kong ranks 22nd out of 55 characters, placing him in C tier. He has been buffed overall, with faster attacks and improved combo ability, especially with his cargo up throw. The new rage mechanic benefits Donkey Kong very well, which when combined with his heaviness, allows him to deliver greater knockback at higher damage percents. Donkey Kong's trademark power and speed are retained from past games too. Although he is regarded as one of the game's best super heavyweights along with Bowser, he still suffers from common weaknesses that plagued him in the past, such as vulnerability to combos due to his weight and size, and his recovery in Spinning Kong still gaining little vertical distance. Nonetheless, Donkey Kong's strengths have allowed him to secure decent tournament representation and above average results.

The original Donkey Kong reprises his role on the 75m stage in Super Smash Bros. for Wii U, functioning the same way as in Brawl.

Donkey Kong
This king of the jungle really, really loves bananas. His adventures usually start with people stealing his hoard of them. In Smash Bros., he's known for his incredible strength and long reach. Despite his size, he's still pretty quick. He can even jump carrying heavy items! Use this knowledge well.

Donkey Kong (Alt.)
Donkey Kong pulls no punches when it comes to fighting. Or headbutts, as it turns out. His Headbutt special move will bury anyone on the ground who gets hit, leaving them open to some serious damage. If Donkey Kong strikes an airborne foe with this move, they'll go crashing downward.

Donkey Kong + Barrel Train
This mean machine may look like it was meant for the tracks, but really it was made to soar. That fine wood finish isn't so great in the water, though. I bet more than a few players have fond memories of the Barrel Train and its first driver, Diddy Kong.

Donkey Kong returns as a veteran in Super Smash Bros. Ultimate. His design is slightly changed, and so are his attacks. He is floatier with slight buffs to some of his moves. He also has a completely new Final Smash in the form of Jungle Rush, which originated from Donkey Kong Jungle Beat, replacing Konga Beat.