The Dolphin Slash is Marth's Up Special Move. Marth flies quickly upwards, blade extended vertically. It provides decent vertical recovery, but very little horizontal recovery. It can be used as an OoS (Out of Shield) option and can be used to edgeguard an opponent.

A "Reverse Dolphin Slash" can be performed by starting the attack and quickly moving the joystick backwards. This will cause Marth to turn around just before jumping upwards, and if it hits an enemy close to him as he starts the move, it provides much higher damage and knockback, due to the hitbox and sweetspot layout of his sword.

In Brawl, the regular Dolphin Slash appears to be at least as powerful as Melee's Reverse Dolphin Slash. Marth can be seen jump-cancelling a shield into it for potential kills at about 100% (130% on heavyweight characters).

This move in Brawl has several more advantages than the version in Melee. It goes slightly more horizontal, and its vertical recovery is still great. It is also one of the few moves to retain the similar speed in Melee. However, it lacks the higher potential to KO in comparison.

Dolphin Slash's damage and knockback is strongest in it's first few frames of attack. The longer the attack is out, the weaker it gets. It's best used point blank if it's meant to be used as an attack, since the later frames of the attack are weaker than the beginning frames.

What makes this move really shine are the invincibility frames starting on frame 1 to 5, allowing Marth to escape chain grabs and multi hit attacks. The move hits the opponent on frame 5, same as it was in Melee. This makes Dolphin Slash Marth's fastest move. 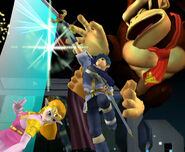 Dolphin Slash in Melee
Add a photo to this gallery
Retrieved from "https://supersmashbros.fandom.com/wiki/Dolphin_Slash?oldid=363260"
Community content is available under CC-BY-SA unless otherwise noted.