For the term used to define matches where both players choose the same character, see Ditto match.

Ditto (メタモン, Metamon in Japan), is a fictional creature in the Pokémon media franchise.

As a removed Poké Ball Pokémon

Ditto is a Pokémon that was removed from Super Smash Bros. Melee just prior to its release. Its supposed purpose was to transform into AI copy of the user's character, which would aid them in battle. However, processing problems forced its removal.

It can be accessed using special software such as Action Replay, but its Transform ability is not present. Instead, it simply says "Meta!" then disappears. It also deals around 7-8% damage to whoever touches it.

As a Tournament Mode element

In Tournament Mode, in either Winner Out or Loser Out style tournaments, when selecting a character for these events, simply hold down L+R and then press A. The character will appear as Ditto, and will be a random character and color when each match begins.

Ditto features as a collectible trophy, unlocked as one of the 290 trophies that can be collected randomly during normal play, such as in the Trophy Lottery and throughout the various Single-player Regular Matches. It reads as follows:

Every Ditto has the ability to copy a Pokémon's entire cell structure in an instant and become its exact replica. They're terrible at remembering techniques, but when they use Transform, they temporarily learn all of their foe's moves. If a Ditto starts to laugh, it weakens and can't hold its transformation.

Ditto was finally implemented in Super Smash Bros. Ultimate. As was planned in Melee, it will transform into a copy of the user's character and aid them in battle. 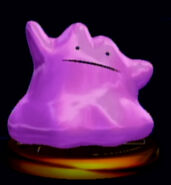 Retrieved from "https://supersmashbros.fandom.com/wiki/Ditto?oldid=553754"
Community content is available under CC-BY-SA unless otherwise noted.